END_OF_DOCUMENT_TOKEN_TO_BE_REPLACED

Tonight’s episode of The Ex List [CBS, 9/8C] – Do You Love Me, Do You, Surfer… Boy” is the fourth of the show’s first [and quite possibly last] season and, despite several ingratiating performances [and a wide variety of ex-boyfriends], it isn’t a substantial improvement over the pilot. 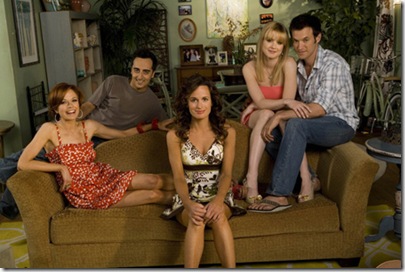 Bella [Elizabeth Reaser] is following her plan to revisit her past boyfriends as per the fortune teller’s [Anne Bedian] prophecy that her soulmate is someone with whom she’s had a romantic relationship – and that if she hasn’t found him within a year, she’ll never marry. As a result, she’s encountering – in various unexpected ways – past boyfriends by the bucket load. This week it’s Shane [Brian Van Holt], a surf bum who has “grown up” to be famous and surprisingly business savvy.

The episode begins when the two meet cute and begin to see each other. We get a token look at Bella at work and there are arcs involving her engaged sister, Daphne [Rachel Boston], getting some photos done; her roommates, Augie [Adam Rothenberg] and Vivian [Alex Breckenridge] having some relationship problems [a showerhead and little to no imagination are involved], and Cyrus [Amir Talai] trying to scam a free board to teach a gorgeous woman to surf.

Although the subject of Bella’s quest is different, the pattern is pretty much beat for beat the same. The reconnect; they feel the generated chemistry; they learn how each changed over the years, and they fall apart just as things might be getting serious. The only difference here is that Shane has the potential to reappear in her life. Of the rest of the arcs, the only one that works is the showerhead one. Daphne might as well not have appeared in the ep, and Cyrus has gotten really old, really quickly.

In the pilot, written by series creator Diane Ruggerio, there were suggestions that we would see more of Bella’s life than just the fun parts and the ex-boyfriend parts. It seemed like we were going to get to see her at work as well as at play – and that her friends were going to actually be characters. The network, apparently, thought that the show should focus on just the play and romance and not the other [biggest] part of her life. The result is a show that entertains only sporadically, held aloft by the sheer charisma of Reaser and the characters of Augie and Vivian.

Given the potential in the pilot, this simply isn’t good enough. After invoking The Three-Ep rule, I was ready to stop watching, but CBS made a screener of the fourth ep available for review, so I asked for one. Sadly, it shows improvement only insofar as the ex of the week has the possibility of returning. In every other respect, The Ex List has not found the balance it needs to make it worth continued viewing.

Elizabeth Reaser did such a great job of playing the badly injured Ava/Rebecca on Grey’s Anatomy that it seems only right that she should have asked to front a series of her own. The Ex List [CBS, Fridays, 10/9C] is a bit of a high concept dramedy – Bella Bloom [Reaser] is told by a psychic [Anne Bedian] that she must marry within the year or she never will – but she has already met her soulmate, and he’s someone she’s had a relationship with in the past! 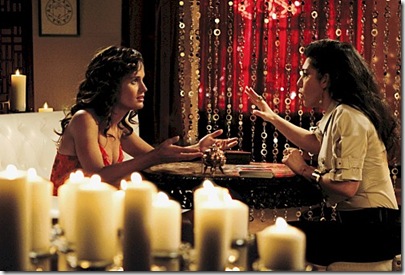 Bella’s situation arises from the bachelorette party for her younger sister, Daphne [Rachel Boston], and her own weird thought that visiting a psychic would be the perfect way to cap the evening. When other predictions she made come true in wildly unexpected [and funny] ways, she begins to take the psychic seriously – not least of all when bird poop leads to her discovery that former boyfriend Johnny Diamont [Eric Balfour] is back in town – and has a punk rock band. When she and roommate Vivian [Alexandra Breckenridge] go to his show, his first song shows he remembers her, and not particularly fondly…

The Ex List is based on an Israeli series, but seems to be of a vastly different tone [Diane Ruggerio, who adapted the series for America, left the show over creative differences – and she wanted to maintain the tone of the original]. In the premiere, she has a life – she runs a flower shop and has a core group of friends who share a house with her: the aforementioned Vivian, her best friend; Augie [Adam Rothenberg], Vivian’s boyfriend, and Cyrus [Amir Talai], who is a bit of a cynic and a slacker.

Although Reaser doesn’t have to do all the heavy lifting, she is the principal here, and her ability to shift from comedy to drama to melodrama in mid-line [and to look really, really good in a bikini] is the show’s primary plus. The cast has solid chemistry [always important], but the writing isn’t quite right, yet. The balance between humor, drama and melodrama needs to be tweaked [less melodrama, more drama – the humor content is about right]. I enjoyed the pilot, but I hope that the show will find that balance – that sweet spot – that can elevate it to the next level.