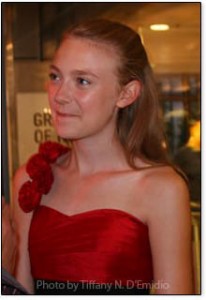 When you think of Dakota Fanning the first thing that might come to mind is a cute, sweet, blonde haired little girl with acting chops beyond her years. Her resume is littered with co-stars that make up some of the biggest names in Hollywood. But she’s not that little girl anymore. She’s actually fourteen years old now and despite the outrageous actions and less than wholesome shenanigans her tween counterparts seem to be notorious for, Fanning has grown into the talented young actor you prayed she would.

She’s co-staring along side Queen Latifah, Jennifer Hudson, Sophie Okonedo, and Alicia Keys in this week’s debut of “The Secret Life of Bees”. Fanning plays the role of Lily Owens, a young woman living in the south during the sixties in height of the civil rights movement. She’s searching for the truth about her dead mother while struggling with the knowledge that she was the one responsible for accidentally killing her. I had a chance to talk with Dakota about movies, family, and even making the cheerleading squad.