In my review of Iron Man during its theatrical run, after noting that the film worked mainly because of its honouring the source material from the Marvel comics, I wrapped up with:

“While the action scenes aren’t as accomplished as something by Michael Bay, they come off better because director Jon Favreau understands that it’s the characters that make everything else in the film work. He keeps the pace high enough to prevent lessening of interest and knows how to make the film’s effects serve the story. This is a film with surprising wit and genuine intelligence.” 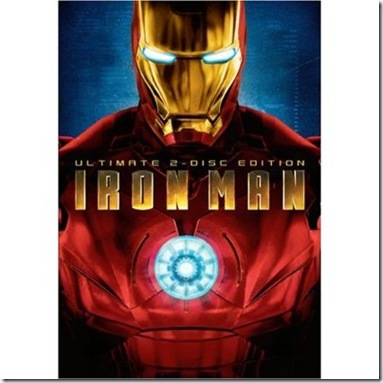 Repeated screenings [twice more in the theater and twice more on DVD] convince me that I was remiss in grading the film a mere A-. Considering that the film’s only real flaw is that the big fight scene between Iron Monger and Iron Man is a bit clunky [which, when you think about it, is appropriate for the big, clumsy looking Iron Monger], and considering that the film translates extremely well from big screen to small, I have to revise that upwards.

Then there are the multitudinous features. How many are there? Check this out: Disc One: Eleven Deleted and/or Extended Scenes; Iron Man Adventures Teaser; Disc Two: I Am Iron Man [Seven Featurettes Documenting the Making if Iron Man: The Journey Begins; The Suit That Makes The Iron Man; Walk of Destruction; Grounded In Reality; Beneath the Armor; It’s All In The Details; A Good Story Well Told]; The Invincible Iron Man [Six Featurettes Covering the History of Iron Man In Comics: Origins; Friends and Foes; The Definitive Iron Man; Demon In a Bottle; Extremis and Beyond; Ultimate Iron Man]; Robert Downey’s Screen Test; The Actor’s Process [Downey, Jeff Bridges and Jon Favreau figure out a scene]; The Onion: Wildly Popular Iron Man Trailer To Be Adapted Into full-Length Film; Galleries: Concept Art [Environments: Afghan Cave, Stark Estate, Stark Garage, Stark Industries; Characters: Iron Man, Iron Monger, Tony Stark]; Tech; Unit Photography, and Posters. There is no commentary track and that costs the Features grade.

The DVD’s menus are patterned after the 3D Hologram effects in the film and are both really cool and easy to navigate. The DVD comes in a standard box inside an embossed card stock slip cover.