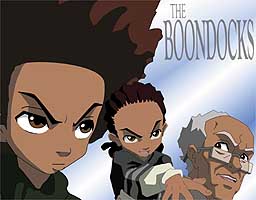 When the second season of The Boondocks premieres tonight [Adult Swim, 11:30/10:30C], there will be a few cosmetic changes. The animation is noticeably improved and the sound is better. What hasn’t changed is the way that stories written over a year ago will still seem as if they were ripped from today’s headlines.

END_OF_DOCUMENT_TOKEN_TO_BE_REPLACED 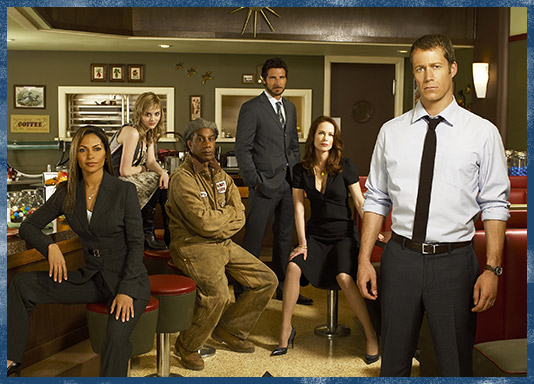 END_OF_DOCUMENT_TOKEN_TO_BE_REPLACED

Now entering its fourth season on CBS [10/9C], Numb3rs continues to mix character, procedural and science [mathematics] elements in its own unique way to provide some of the quirkiest material of any of the far too many procedurals on TV. This season, Executive Producer Tony Scott steps behind the camera to direct Trust Metric, the season opener – and the conclusion to the sorta/kinda cliffhanger of last season’s finale.

END_OF_DOCUMENT_TOKEN_TO_BE_REPLACED

Friday night marks the return of one of the most consistently entertaining sci-fi series: the Sci Fi Channel’s Stargate: Atlantis [10/9C], . Stargate: Atlantis kicks off its new series by welcoming SG-1’s Col. Samantha Carter aboard in the midst of death, destruction and mayhem. It’s definitely not just another day at the office! END_OF_DOCUMENT_TOKEN_TO_BE_REPLACED

END_OF_DOCUMENT_TOKEN_TO_BE_REPLACED

We’ve had to wait an extra four months for the return of Battlestar Galactica [Sci Fi, Fridays, check local listings], but it was worth the wait. The special, Battlestar Galactica: The Story So Far, this week – and when the third season premieres, next week, it returns the show to its place in the ranks of the very best programs on television. It also begins four months after the Cylons discovered New Caprica and forced the government of the Twelve Colonies to surrender. Where to begin? The Leoben [Callum Keith Rennie] model has returned and taken Kara “Starbuck” Thrace [Katee Sackoff] away to live with him; the Brother Cavil model [Dean Stockwell] is advocating the reduction of the human populace to something more manageable; Lee “Apollo” Adama [Jamie Bamber] has gotten fat, and Gaius Baltar [James Callis] is now head of a puppet government. In short, things are going to hell in a handcart and there doesn’t seem to be anything anyone can do about it.  END_OF_DOCUMENT_TOKEN_TO_BE_REPLACED

Between getting a new franchise off the ground, and sparking new life into the original, the creative teams between

The trick, when creating a successful spin-off, is to extend the creative palette in such a way as to maintain the core of what made the original successful, and then add enough of a change that the new series isn