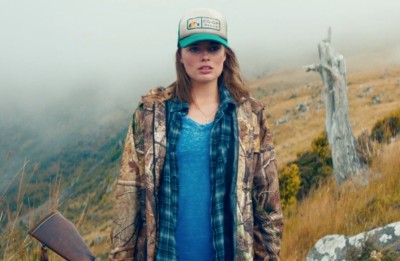 Z for Zachariah is a gently disturbing end of the world movie that never moves beyond a leisurely pace but never ceases to be fascinating.

A young woman (Margot Robbie) works at keeping a farm going. Indications are that she believes herself to be the last living person on the planet.

Then, she discovers a figure in a bulky metallic suit pulling a wagon on the road between her farm and the ghost town she raids for materials and whatever canned food she can find. As she watches from cover, the person in the suit is revealed to be a somewhat older black man (Chiwetal Ejiofor). He shucks off the suit to dive into a nearby pool – which forces her into action. 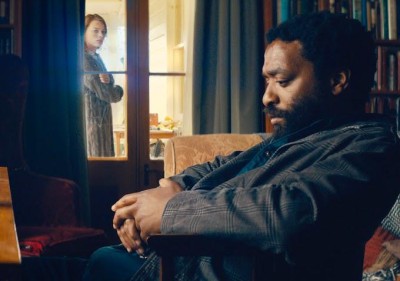 After a very shaky few moments when they each brandish weapons, she manages to persuade him to get out the water – it’s not from within the valley and he finds himself succumbing to radiation poisoning. She manages to get him to her farmhouse and takes care of him as he recovers. His name is John Loomis and hers is Anne Burden.

As we watch, the two cautiously begin to form a tentative relationship. As they are beginning to feel comfortable with each other, a white man who calls himself Caleb (Chris Pine) appears.

Annie, with her naturally open and trusting nature brings Caleb home with her – but John is not so trusting and threatens him with a rifle until Annie persuades him to let Caleb stay for a few days to rest up before heading off to an alleged surviving town.

Slowly, things begin to change. John’s distrust and Caleb’s glibness – he claims he lied a bit so as to not cause problems – affect the dynamic between John and Annie. Neither man comes off terribly well here, though neither really does anything truly evil. It’s a case of small things that call less wonderful bits of history to mind – and the way a project to provide electricity to the farm takes a possibly unforeseen turn. 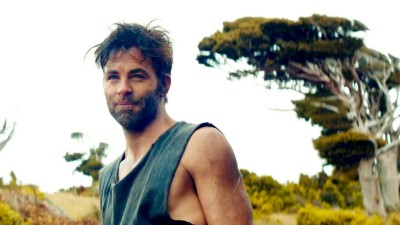 Essentially, what we have here is a Garden of Eden situation but – thanks to a genuinely intelligent script and superbly modulated direction – one in which it’s impossible to say which man is the snake. What makes the situation even more intriguing is that Annie is the only one of the three who is genuinely religious – which is also something that plays heavily in the aforementioned project.

With the film being a three-hander, Ejiofor, Pine and Robbie have to do all the emotional heavy lifting. All three rise to the challenge in wonderful style. We might expect Ejiofor’s performance – he’s been brilliant in quite a number of films since his terrific turn as a villain in Joss Whedon’s Serenity. Robbie hasn’t been seen here very much, but has been terrific in a range of films from The Wolf of Wall Street to Focus (in which she was easily the best part).

The revelation here is Pine. We’ve seen him do heroic turns as James T. Kirk and Jack Ryan (where he was better than the material); we’ve seen him display comic chops in Horrible Bosses 2 (again, the best thing about that movie) and Cinderella (plus, a heckuva set of pipes).

In Z for Zachariah, he displays the ability to give a character so many shades that we really can’t tell if he’s a good guy, a twisted evil, or some middle point between. It’s quite possibly his best performance.

Director Craig Zobel (Compliance) and writer Nissar Modi (Breaking at the Edge) have adapted the novel by Robert C. O’Brien – with a few changes, or so I’m given to understand – in a way that makes us think while we’re being entertained. Not to mention that it is riveting even at its less than frenetic pace.

Z for Zachariah is refreshing for its willingness to require its audience to be smart, perceptive and empathetic. It never questions the possibility that humanity could survive a global catastrophe – it just asks if we really deserve to.