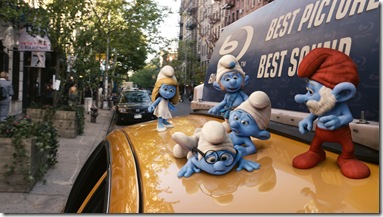 The Smurfs is an attempt to bring the cheerful, three-apples-tall blue folks of the long running run Belgian comics series by Peyo to life using a mix of live action and CG in 3D. It’s a little slow for the under-six crowd and a little too insubstantial for the over six crowd.

Full disclosure: I’m more of an Asterix & Obelix kinda guy than a Smurfs fan – I’ve always found the Smurfs to be too precious and too small ‘s’ silly.

The movie adaptation – written by J. David Stern & David N. Weiss and Jay Sherick & David Ronn [the ampersands are essential in terms of writing credit assignment] and directed by Raja Gosnell – attempts to bring the Smurfs’ brand of silliness into the real world of New York City.

The movie opens with the Smurfs once again outsmarting [and hurting in silly ways] their archenemy, the wizard Gargamel [Hank Azaria, partially hidden by some pretty decent latex appliances] and managing to elude him near a waterfall. Events lead to a wormhole opening in the waterfall and drawing a handful of the little blue folk to NYC – Papa Smurf [voiced by Jonathan Winters], Gutsy Smurf [Alan Cumming – in his native Scottish accent], Smurfette [Katy Perry], Brainy Smurf [Fred Armisen], Grouchy Smurf [George Lopez] and Clumsy Smurf [Anton Yelchin] [who actually caused the whole mess, of course], with Gargamel not far behind.

Events further conspire to bring the little blue guys [and gal] to the home of Patrick and Grace Winslow [Neil Patrick Harris and Jayma Mays] where they freak out Patrick but quickly win over Grace and the family dog.

Papa figures out the materials he needs to return home, but Gargamel has plans to trap the Smurfs and use their essence to make himself the most powerful wizard in history. The rest of the film is, essentially, the Smurfs and the Winslows bonding and trying to prevent Gargamel from working his evil magic. 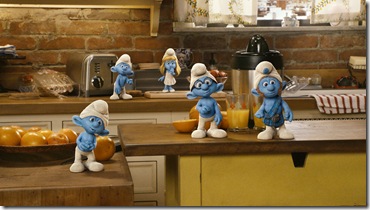 A subplot about Patrick – a marketing person for a purveyor of fine cosmetics run by a gorgeous but bad-tempered boss, Odile [Modern Family’s Sofia Vergara] – has him being nervous about an ad campaign that could cost him his job [and which gets snafu’d by Clumsy, just to add to the chaos].

Harris and Mays make a cute couple and have definite chemistry, though they aren’t given much in the way of material to work with. That the movie isn’t a complete write-off is largely due to their being so good together.

Odile, who at first, seems as nasty as Gargamel, is an over the top character whom Vergara, an almost aggressively beautiful woman, imbues with more life than anyone else in the film.

As for the Smurfs, their misadventures and perils hardly seem weighty enough to warrant a TV special, let alone a movie. Their use of the word ‘smurf’ for all kinds of different things grows tedious pretty quickly – though Harris gets a good scene in which he substitutes smurf for naughtier words [and is chastised by Gutsy], which may actually be the funniest moment in the movie.

Gargamel’s familiar, an orange tabby called Azrael, gets a few laughs, too – more than Gargamel.

There are some cute visual gags [one with the Smurfs ‘blending in’ on a cab’s roof is a lovely pus], but mostly The Smurfs works out to be a pretty average effort. Releasing it in 3D [however good the 3D might be] could be seen as a money grab, and releasing it against Cowboys and Indians is definitely a mistake.