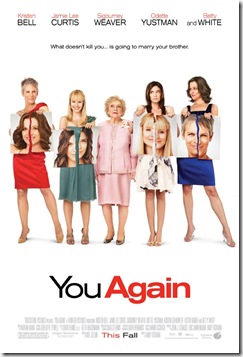 Marni Olive Olsen [the middle name is critically important] takes a few days off from the prestigious PR firm where she’s just been made a VP in order to attend her brother’s wedding. When she gets home, she discovers his fiancée is the head cheerleader who made her life a living hell in high school. Hilarity was intended to ensue.

You Again has a lovely set up in the history between Marni [Kristen Bell] and her brother Will’s [James Wolk] fiancée, Joanna [Odette Yustman]. Then it piles things on – Joanna’s sole living relative, her aunt, Ramona [Sigourney Weaver], seems to have had an equally contentious relationship with Marni’s mother, Gail [Jamie Lee Curtis].

While Marni’s been working her way up the ladder at that PR firm, Joanna has been winning over every one of her family – from her father Mark [Victor Garber] to her grandmother [Betty white], to the family dog, Cocoa Puffs [who growls at Marni when she first gets home]. Joanna has, apparently, turned over a new leaf and is now the soul of human kindness and generosity – but looks she shoots Marni’s way in brief flashes would suggest otherwise.

Because Will always tried to protect Marni in high school, she decides to show him what kind of person Joanna really is. She enlists her brother Ben’s [Billy Unger] aid using a special treehouse as her ace in the hole when he’s not eager to help.

The arc with Ramona and Grace is less virulently awful than the one between Marni and Joanna in that it is motivated by one [albeit huge] mistake.

I laughed, chuckled or otherwise positively responded to You Again fewer than a half dozen times – and two of them for Betty White gags that were funny even though you could see them coming. White is just that good. One instance was provided by Garber in response to actions taken by his wife and daughter [if you do see the movie, you’ll know the scene when you see it]. That scene almost salvaged the movie – but the overwhelming accumulation of cliché and poor pacing were just too much for it.

You Again is the kind of film that Disney excelled in the fifties and sixties. It’s light and fluffy and should be a triumph of variations on a series of clichés, but us undone by a script, by Moe Jelline, that goes exactly where we expect it to go ninety-nine percent of the time. Andy Fickman, whose one quality credit is Reefer Madness: The Movie Musical [also starring Bell], seems to have no idea how to pace the film and his transitions from scene to scene are either too clever by half, or just awkward.

In spire of all of that, though, the fine cast does everything it can to make You Again work. Alas, they are performances in search of a movie.

Compared to such cinematic wonders as Grown Ups and I’m Still Here, You Again is an improvement. Compared to most everything else, not so much.