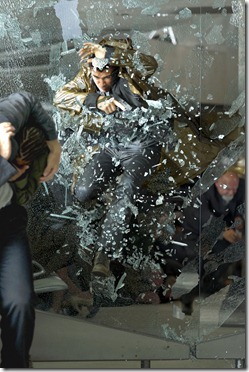 In this take on the Dick short story – marginally closer to it, in fact, than the Verhoeven version – assembly line worker Douglas Quaid (Colin Farrell) is having a hellish day. First he has a nightmare that he and a woman (Jessica Biel) he’s never seen before (except in this recurring nightmare) are being chased and shot at; then he goes to work and finds that, until further notice, everyone will be working double shifts, and then, just to make things perfect, he gets passed over for a juicy promotion.

The assembly line he works on is for the manufacture of synthetic (robot) police – and the reason manufacturing quotas have suddenly been cranked up is a terrorist attack. It seems that there are two inhabitable areas left on the planet – one is the United British Federation and the other, The Colony (Australia). The UBF is home to the 1%; The Colony is home to everyone else. Workers from The Colony work in the UBF, which they reach by a kind of super-elevator, called The Fall, that runs through the planet’s core. Everywhere else was destroyed by a chemical war that filled the rest of the planet with noxious gases.

Anyroad, when Quaid gets home after a quick pint with a mate from work (Bokeem Woodbine), he finds that Lori, his lovely wife, has also pulled extra-long duty and has already gone to bed. So he does what anyone would do – he goes to this snazzy new place called Rekall, where they claim to be able to give you the memories of a fabulous adventure without your ever having to go on siad adventure.

He chooses to be a spy but, just as everything is set to give him his adventurous memories, in burst a horde of cops – whom he dispatches in a hurry, with skills that leave him aghast. When he confides in his wife, she turns out to be someone else, too – a kind of over qualified minder. Who promptly tries to kill him! Now he’s on the run, though he has no idea why and can’t even be sure of who he is.

And yes, the woman from his nightmares is real. 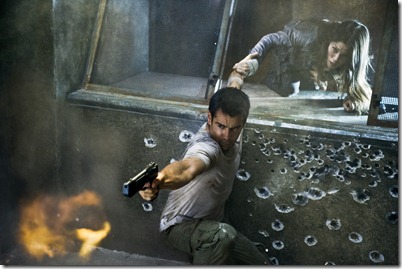 The world of The Colony is the kind of hodgepodge you might expect from a place where war survivors from around the world are unceremoniously clumped together. Street signs reflect all manner of ethnicity – Chinese, Russian, English and more – and the crowded ghettos look like futuristic favelas. The UBF, on the other hand, is somewhere between the Krypton of the comic books and The Jetsons – only bleached into a staggering array of whites, blacks and greys.

The film’s production design is such that it lends itself to all kinds of chases – running and jumping through the neighborhood in which Quaid lives; racing hovercars over and under roads; dodging through elevator systems where the elevator cars move not only up and down, but sideways and forward and back.

The fighting – and there is plenty of it – is a messy mixture of martial art and brawling. Whether it’s Quaid vs. the Mrs., or the Mrs. vs. Melina (nightmare woman), or Quaid vs. dozens of cops (real and synthetic), there is pain involved. Punches land with authority; kicks are devastating, and guns flash with lethal intent.

The film’s rare quiet moments are essential to the plot and the character development, but we learn as much about any of them through their actions as from things they say.

Bryan Cranston takes a chunk out of the scenery as Chancellor Cohaagen, the de facto ruler of the UBF, while Bill Nighy is considerably more philosophical as the leader of the alleged terrorists, Matthias. The only thing they have in common is that they both completely believe in themselves.

Director Len Wiseman is best known for the critically reviled but commercially successful Underworld movies and, as with them, he keeps things moving at a frantic pace for the most part. Interestingly, during the chase sequences, he focuses as much on the faces of the characters as on the actual chases. While this gives us plenty of opportunity to enjoy the gorgeousness of Biel and Beckinsale (which I’m sure is intentional), we also get to see the fear and desperation of the pursued – and the determination and building hatred of the pursuer.

Total Recall may not delve into all the ramifications of the manipulation of minds, but it does a fine job of showing the feelings of the man whose mind has been manipulated. That, combined with the film’s energy and intensity, makes it a dazzling bit of entertainment – even if you might not be discussing philosophy and the nature of identity on the way out of the theater.

2 thoughts on “Total Recall Remake Is Not a Total Disaster! It’s Actually Rather Fun!”