The first movie in the series had one really good action sequence and a bit of clever banter but largely a waste of space.

Out of the Shadows makes a more than casual nod to the delightful animated series of the eighties and, when it gets it right is definitely an improvement. Then it squanders those improvements for a harebrained subplot that builds resentment between the brothers.

Out of the Shadows opens promisingly enough with Casey Jones (Stephen Amell, Arrow) being the officer in charge of a convoy transferring Shredder (Brian Tee) to a maximum security prison with a couple of dunderheads – Rocksteady (Sheamus) and Be-Bop (Gary Anthony Williams) – a convoy that is interrupted by the Foot clan.

Despite the intervention of the Turtles, the escape goes well for Shredder – almost. The teleportation device he’s using delivers him to another dimension where we meet Commander Krang (voiced by Brad Garrett) who requires him to find three pieces of another device – one that will enable him and his army to invade our dimension and conquer the Earth.

Jones finds himself suspended by Chief Vincent (Laura Linney) after relating the events that ended in Shredder’s escape. Subsequent events bring Casey and April together for an iconic hockey moment before bringing in the Turtles.

In another meanwhile, Shredder uses purple ooze to turn the two dunderheads into a giant rhinoceros and warthog.

And the race is on – for Shredder to find the three pieces and let Krang into our dimension and for the Turtles, April and Casey to prevent him.

Because this is a Michael Bay production, let’s address the action first. Shredder’s escape, the garbage truck sequence and pretty much all of the movie’s action sequences are more original – or at least ore original variations – than all but one sequence from the first movie.

The 3D conversion is really good – the 3D isn’t just a gimmick to get an extra few buck from the audience. It is, in fact, used judiciously and really ramps up the effectiveness of the action set pieces. The effects are much better than those of the first movie overall.

In terms of the story, well, it could have been lifted from an arc from the animated series. It’s loud and frenetic and occasionally clever – and if it hadn’t been waylaid by the dissension subplot, it might well have been great fun. 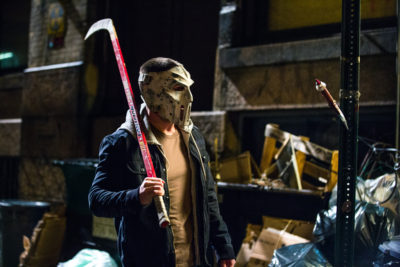 Instead, the banter between the brothers never quite recovers – though when they’re on (especially Mikey), there’s some great moments. Some of the visual gags – like Donny’s encounter with a jet – work really well and others, like Fenwick’s (Will Arnett) following a video cable to its source, are predictable and fall flat.

The script – by Josh Appelbaum and André Nemec – is kind of thin and there’s not a lot for the cast to work with outside the banter.

That said, Dave Green (Earth to Echo) provides some directing muscle – keeping the pace up and getting surprisingly likeable performances from his cast: Amell and Fox have terrific chemistry and Amell is pretty funny (there’s a line – you’ll know it when you hear it – that plays off his Oliver queen character in Arrow to hilarious effect); Linney’s Vincent is a driven harda$$ who’s not afraid to admit when she’s wrong; Perry takes Stockton to such out there cartoon lengths (think a human Goofy with Einstein’s IQ) that he provides a few great moments before becoming tedious.

The point is that they are all very much committed to the lunacy of this big, action-packed ride.

The big problem is that Out of the Shadows, as technically admirable as it is (and as committed to their roles as the cast members are), is too serious too often. Even Steven Jablonsky’s score is almost Dark Knight serious.

Still, Out of the Shadows is a couple notches better than the original. I even enjoyed enough of it to give it a (marginally) passing grade.