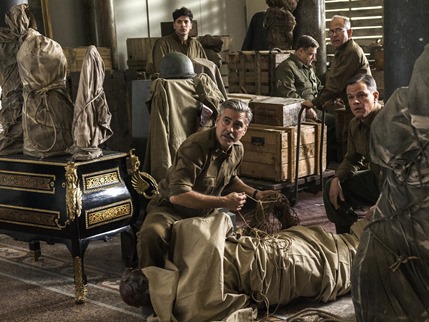 George Clooney’s The Monuments Men is a hymn to culture that is never quite pitch perfect. The story of a special group tasked with recovering and returning artworks stolen by the Nazis in World War II, the film lurches between locations and characters for much of its first half before pulling together.

Tasked by FDR with recovering artworks stolen by the Nazis for a planned massive Fuhrer Museum, art historian Frank Stokes (George Clooney) puts together a team of experts in art, sculpture and architecture to just that. To say it’s a motley group would be a kindness. His group of middle-aged scholars would almost certainly have been classed as 4F under any other circumstances.

The first half of The Monuments Men is the usual sort of thing – getting the assignment (through some speechifying from Stokes); putting the team together (complete with boot camp montage); arrival in France and setting up the teams. Most of the film’s humor and a good bit of its heart – comes from the two teams: the massive-by-comparison Campbell and diminutive Savitz are a combination of Mutt & Jeff and Laurel & Hardy; the bluff Garfield and the suave Clermont are an odd couple.

While Stokes coordinates and Epstein gathers intelligence by not letting on he’s actually German and listening to German prisoners, Granger and Jeffries go it alone – Granger in Paris, trying to persuade Claire Simone (Cate Blanchett) to share her intimate knowledge of the Jeu de Paume and help him find out where the Nazis have taken their stolen art. A resistance worker who has been mistakenly imprisoned as a collaborator, she is not quick to trust. 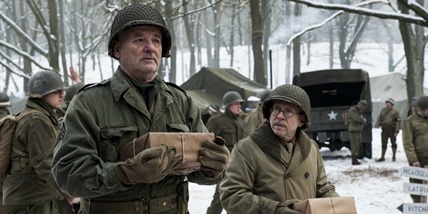 To be blunt, I found it difficult to fully engage with The Monuments Men for much of the first part of the movie. While the performances were terrific, as you’d expect from that cast, the movie felt unfocused and too blunt. Clooney seemed to be trying too hard to come off as passionate yet casual in the lead role and some editing choices made transitions from scene to scene, character to character, herky-jerky.

It wasn’t until a scene where Balaban and Murray try to survive Christmas in miserable circumstances that I really began to feel some of the impact the film was intended to have. Considering how hard Clooney worked to make a statement about the importance of culture to our survival as a society, it took this deftly underplayed sequence – with Balaban’s Savitz making an unexpected gesture for Murray’s Campbell, a sequence in which they aren’t even in the same space – to provoke an emotional response .

Despite the rest of the film feeling like a heist film that was paced too slowly, The Monuments Men picked up enough heart from that point to more or less come together. Based as it is on historical record (the photos of the real characters that run under the closing credits make that point) – and with the tendency to American Hustle’s disclaimer (‘some of this stuff actually happened’) – The Monuments Men doesn’t quite go as far as it could have in the way of entertainment, but neither does it quite reach the loftiness of its goal of importance, either.

Its dilemma is encapsulated in the two very different trailers that were released to promote it: the first was very funny, setting the film up as a historical heist film a la Kelly’s Heroes; the second was more dramatic, a la John Frankenheimer’s The Train. Despite containing both drama and humor, it never quite feels urgent enough, dramatic enough, or funny enough to pack the punch I was expecting.

The Monuments Men winds up being a bit too laid back to be completely effective as a war movie, a heist movie, or a statement film. It’s beautifully shot, but excellent though some of its parts might be, the whole is a just bit less than the sum of those parts.