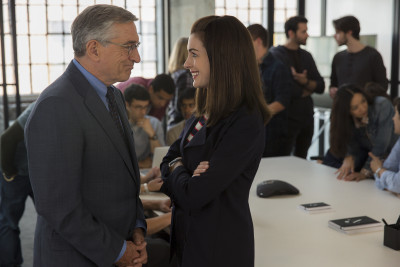 The Intern is that buddy movie where the buddies are a man and a woman. It’s also a paean to being contemporary without sacrificing the best what the past has given us – and about the idea that a woman can or at least should be able to have it all. It’s also about grey power.

That all these themes are wrapped up in a slight little dramedy is something of a small miracle.

Ben Whittaker (Robert DeNiro) is a recent widower and between being alone and retired, he’s more than a little bored – bored and melancholy.

Every morning he gets up, gets dressed in suit and tie, eats breakfast and goes out. He gets a newspaper, has coffee and walks around – maybe does Tai chi. Sometimes, he delicately fends off the amorous intentions of Patty (Linda Lavin). Mostly, he’s just alone.

One morning he sees an ad in his newspaper about a senior intern program opening up at an online high fashion business and applies for the job (after being coached by his nine-year old grandson on how to make a video and upload it onto the internet).

In his interviews go well and soon he finds himself the personal intern for Jules Ostin (Ann Hathaway), the founder and CED of the company. Through a series of small events, he eventually meets her family, changes the culture of the company for the better and helps Jules avoid making a terrible mistake that could have destroyed her company.

Jules Ostin is a Type A personality who turned an idea – high fashion clothes bought over the internet that arrived in time and fit right – into a thriving business, going from a handful of employees to 220 (including four new interns) in only eighteen months.

She has a seemingly perfect stay-at-home husband, Matt (Anders Holm), who looks after their cute-as-a-button daughter, Paige (Jojo Kushner) and a job that lets her get less than five hours of sleep a night. 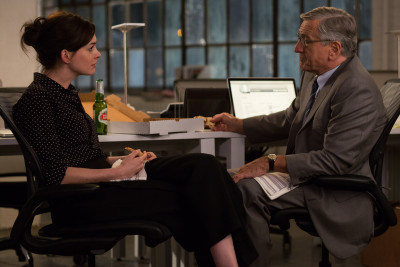 Her second in command, Cameron (Andrew Rannells), is the go-between between her and the company’s investors – who have taken the position that she should hire a CEO to lighten her load an idea she hates, but becomes more open to as things get more and more hectic at work).

Written and directed by Nancy Meyers (Something’s Got to Give, It’s Complicated, What Women Want), The Intern is about the developing friendship between 70-year old Ben and thirtysomething Jules and the way that friendship helps both of them deal with crises in their lives (in her case the crises are both in her business and personal life).

Peripheral relationships build between Ben and the one young intern who comes aboard the same day as him, and a couple other guys at the company – leading to a tiny heist gag in the middle of the film that gets the most laughs in the movie’s 121 minutes – and a more romantic relationship between Ben and Fiona (Rene Russo), the company masseuse. The Intern, though, is mostly about Ben and Jules’ relationship and DeNiro and Hathaway work so beautifully together that it’s breathtaking.

In its two-hours, The Intern posits the concept that senior citizens remain valuable contributors to society (and business) if given the chance; suggests that a man and a woman can just be best friends without there being anything skeevy about it, and one can never underestimate the power of the handkerchief (for that particular life lesson, you’ll have to see the movie – you won’t be sorry).

There are no real villains in The Intern – something that is actually a bit of a relief – and what little conflict there is, is between Jules and herself as she tries to sort out what she should do with her company. That’s kind of refreshing, coming as it does, at the end of a summer of movies filled with earschplittenloudenboomer sound effects.

That’s not to say The Intern is without flaws – Jules’ secretary, Becky (Christine Scherer) is horribly underwritten, Linda Lavin is completely wasted and surely better use could have been made of Rannells’ Cameron. The Intern’s pacing can be a bit too leisurely at times (though it always looks amazing thanks to cinematographer Stephen Goldblatt), too.

Overall, though, this is a movie you can watch without covering your eyes or plugging your ears – and it gently makes some important statements about life without being preachy, while being immensely entertaining.