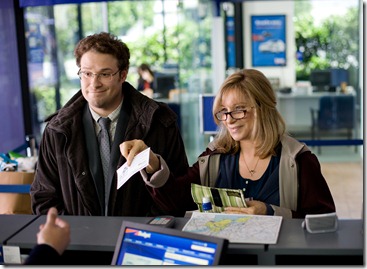 The Guilt Trip is a decent road trip movie featuring Barbra Streisand as Joyce, the Jewish mother taken to the nth degree, and Seth Rogen as Andy, her far too grounded, no-risk-taker of a son.

He invites her on his road trip to try to sell this cleaner he’s invented that is completely non-toxic. Why? Because his mother has told him about the first man she ever loved – and at the end of the road is that guy.

It’s not a brilliant movie, by any stretch, but the sheer stream of improv from Rogen and Streisand – who is perfectly at ease and completely natural as Joyce and has terrific chemistry with Rogen – works as often as not. They make a completely believable mother and son.

Whether she’s embarrassing her son at dinner, in the company of her friends (played by Kathy Najimy, Miriam Margolyes and Rose Abdoo), or trying to figure how much time they should spend actually looking at the Grand Canyon, Streisand is the perfect realization of the stereotypical Jewish mom – until she’s not. Rogen, on the other hand, is the quintessential son who both loves his mother and wishes she would leave him alone. 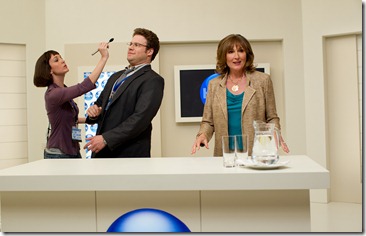 There are sequences that don’t work as well as they might, but others – like the the Texas steak-eating challenge (which features a nice turn from Brett Cullen), Andy’s interview at Costco headquarters, and his unexpected audition at The Home Shopping Network – are great fun.

Yvonne Strahovski (Chuck, Dexter) has a nice turn as Andy’s high school sweetheart (aided and abetted by Colin Hanks in a pretty thankless, humorless role as her husband), whose memories are something of a revelation to Joyce – and give us a taste of just how much mother and son don’t know about each other.

I have no idea how much Dan Fogelman’s script resembles the finished product, but it has to have been at least a solid blueprint for improvisation. Anne Fletcher’s direction might a touch too brisk at times but given the flurries of dialogue that make up most of the film, and given that only about half the jokes land, she does nail the best moments with authority.

The Guilt Trip may not be a bravura comedy, where every line is gold but as much of the humor comes from the situations they encounter as the lines they say. The film is a welcome change from the overwhelming percentage of films that want to Be Significant; to Say Stuff, and maybe win over a few Oscar-voters along the way.

It’s a popcorn movie in the traditional sense and, on that level, it works well enough.