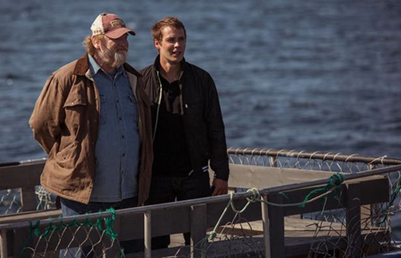 In one sentence, The Grand Seduction is about the people of tiny Tickle Cove Harbor’s attempt to seduce a doctor into staying in their community so a petrochemical repurposing plant can built there and give the Harbor back their pride.

Led by Murray French (Brendan Gleeson), the people of Tickle Cove learn as much about Dr. Paul Lewis (Taylor Kitsch) as they can then bend the community in those directions. For example, he loves cricket, so they (try) to play cricket and pretend they hate hockey.

Of course the folk of Tickle Cove have their problems as the film begins – Murray’s wife has gone off to town to work, likewise the community’s mayor. Then there are the other obstacles blocking the plant’s construction: Tickle Cove falls short of the population requirement by thirty souls; the head of the plant project (Peter Keleghan) wants a ‘personal assurance’ (bribe) of $150,000). 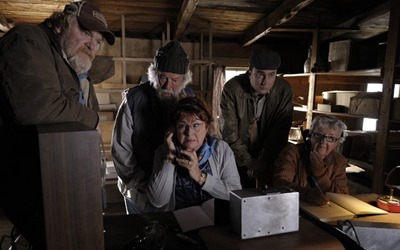 The town’s elaborate scheme for keeping Dr. Lewis around (they need him to sign a five-year commitment agreement) might just work, too. It seems his fiancée isn’t as interested in him as she once was – but it takes round-the-clock eavesdropping for the Harbor folk to stay on top of developments.

The Grand Seduction in based on a French film, Keeping Dr. Lewis, which I now feel I should seek out as Don McKeller’s take on the story is such a delight.

Gleeson, Kitsch and Liane Balaban (the local postmistress who’s having nothing to with Murray’s suggestion she flirt with Dr. Lewis) give standout performances in a standout cast.

I can’t reveal much more of the plot than I have because it would spoil something wonderful. Seeing The Grand Seduction, for me, was like the last time I found five dollars just lying on the sidewalk – an unexpected burst of joy.

McKellar never rushes the story and yet the pacing never feels slow. Each character has an arc, yet the film never seems overstuffed. Plus, there’s the exquisitely lovely settings in which the movie is set – and some of the ways the characters resolve problems can be quite ingenious.

If you’re beginning to suffer blockbuster fatigue, you should definitely give this charming film a look.