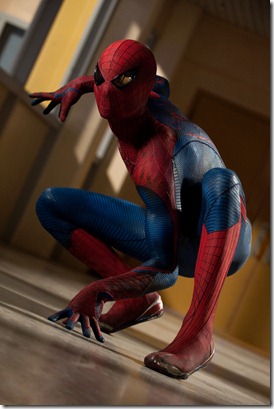 One good reason to reboot a movie series – trademark issues aside – is that you have a different take on the characters. Not necessarily better, but different. Such is the case with Columbia Pictures’ The Amazing Spider-Man.

It’s a bit disconcerting, at first, to see Andrew Garfield’s very John Romita-ish Peter Parker in a film that echoes the darker, edgier tone of the original Steve Ditko issues of the comic, but everything falls together really well. Director Marc Webb pays attention to the characters in such a way that we feel like we really get to know them.

The variation on Spidey’s origin is fresh (and cool) and the idea of Parker not being the scared, mousy wallflower guy but, rather, more the solitary outsider really works. Having Parker get a warning for zipping from class to class on his skateboard, and defending a weaker kid from Flash Thompson’s bullying sets the character’s tone right of the bat – not to mention, impresses the lovely and extremely smart Gwen Stacy (Emma Stone).

The characters are pretty much all interesting and the presence of a talent like Campbell Scott for the few moments Richard Parker is onscreen, gives the character an impact that we can believe would influence an entire film. We certainly accept that Martin Sheen’s Ben Parker is his brother. Embeth Davidtz is equally convincing as Peter’s mother, Mary and Sally Field makes a shrewder, more intelligent Aunt May than we’ve seen before (there’s the teensiest of hints in the third act that she might know Peter’s secret, though she doesn’t say anything…).

In fact, the entire cast was wonderful – though Emma Stone gets high marks as the sassy Gwen Stacy, and Denis Leary is superb as her father, a tough New York Cop who hasn’t allowed his promotion to captain to lessen his feel for the streets. Even Chris Zylka’s Flash Thompson turns out to more than just the standard jock/bully/jerk we are expecting. 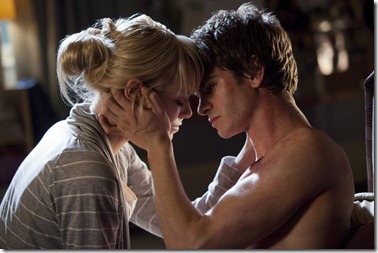 The action scenes, while not the absolute acme of screen action set pieces, feel more real than those in the Sam Raimi trilogy because they factor in factual details like the varying speeds through Spidey’s swinging on his web (maximum speed at the bottom, momentary weightlessness as the speed completely dissipates at the top). The action is heightened by some very Stan Lee-esque quipping by Spidey, adding another layer of verisimilitude to the proceedings.

Rhys Ifans is very good as Dr. Connors/The Lizard, though his character does echo both villains in the first two Raimi Spideys (the internal dialogue of The Green Goblin; the good man who is seduced by the power of his experiments, like Dr. Octopus). Ifans gives Connors a nice combination of hubris and vulnerability – both of which convince him to take his experiments as far as he does.

Like the various iterations of the Spider-Man comics, The Amazing Spider-Man isn’t above using death to heighten its characters’ problems. Let’s just say that Uncle Ben isn’t the only fatality – and that Peter’s search for Uncle Ben’s killer plays an indirect part in the one that follows later.

Like the Disney/Paramount Marvel movies, The Amazing Spider-Man has one last moment during the closing credits. I’d say it was unexpected, because it’s the first one to appear in a Columbia Pictures Marvel movie. The teaser for the sequel is well done and very mysterious – and will, no doubt spawn a lot of conjecture among hardcore fanboys about who might be the next Spidey villain.

The 3D really isn’t worth the extra cash – either in terms of production values or at the box office, but the film has definite impact in IMAX.