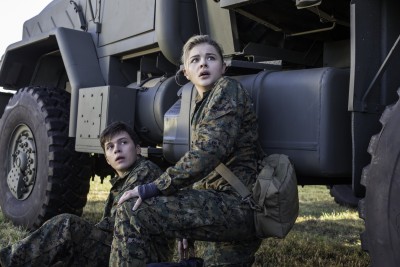 The idea of a teenaged girl leading the forces of good to victory over seemingly overwhelming odds is one of the most used tropes in YA fiction. The 5th Wave is only the latest movie to riff on that idea.

Unfortunately, despite the best efforts of everyone involved, it’s just too easy to figure out what’s going on before the characters do. Not good. Very bad. Go around…

The 5th Wave opens with a teenaged girl (Chloë Grace Moretz) running through the woods until she comes to an empty road across from a convenience store that is obviously no longer in operation. She enters the store and starts grabbing what little hasn’t been taken – a couple bottles of water and a few other things – when she hears someone calling for help from the back room.

Cautiously, she enters the back room, gun drawn, to find a wounded man lying in a corner. He’s pointing a rifle at her. He puts his rifle down but he has a hand under his coat and she orders him to bring it out or she’ll shoot. As he starts to withdraw his arm, there’s a glint of metal and she shoots. It turns out to be a crucifix.

As she flees back into the woods, she wonders what her ordinary self of not that long ago would think of her now. Cut to the day it all started…

A giant craft had begun circling the Earth and panic had started – people just picking up and leaving major urban areas. Then the attacks began – an electromagnetic pulse that knocked out all power and electrically powered technology; floods and tsunamis; a mutated avian flu, and finally, a ground invasion.

We meet Cassie Sullivan the day before the alien craft appeared – at a party where she’s having a great time joking with her friends, mooning over the captain of the football team, but still responsible enough to get home by curfew and sing her little brother Sam (Zachary Arthur) a lullaby.

Then the alien craft appears and things rapidly go pear-shaped.

After the first three waves, the Sullivans – minus Mom (Maggie Sif), who died because of virus – hit the road until they come to a refugee camp. Dad (Ron Livingston) gives Cassie a gun – a Colt .45 – and a quick course in how to load it, arm and disarm the safety and shoot.

Shortly thereafter, the army pulls in – tanks, and jeeps and school buses in their wake. Their leader, Colonel Vosch (Live Schreiber) informs the refugees that they’ll be ferried to an air force base – children first, then the busses will return for the adults. 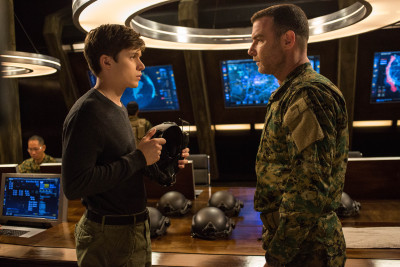 Cassie, who hasn’t gotten on the bus because Sam needed his teddy bear and she’d gone to get it, sees and hears the carnage and flees into the woods where, eventually, she comes across a convenience store.

Elsewhere, Sam falls into a group of kids who, with squad leader Ben Parrish (Nick Robinson) – Cassie’s high school crush – finds himself being trained to fight the aliens. Ben’s squad is joined by a goth-ish girl called Ringer (Maika Monroe).

By this point, I knew what was going and how the movie was going to end – and I hadn’t even read the book.

The 5th Wave is one of those movies you really want to work. The basic idea is a decent enough variation on the post-alien apocalypse trope that it starts out very promisingly. Beginning with Carrie running through the woods pulls us right into the story and Moretz (who seemed almost genetically predisposed to never giving a bad performance) has us in the palm of her hand.

The rest of the cast is also solid – with Monroe a standout as Ringer; the cinematography is great; the effects work is more than sufficient, and director J. Blakeson keeps things moving at a good clip.

The problem is in the writing. Given that we know exactly what the first four waves are, by the time a character in movie begins to ask the right questions, we, the audience, have known what was going on for fifteen to twenty minutes. We aren’t even given an attempt at an explanation. (Maybe there was one in the book; if so, the writers of the adaptation – Susannah Grant, Akiva Goldman and Jeff Pinkner – failed to include it.)

The result is that the audience is smarter than the characters and that’s almost never a good thing.

This is one franchise that doesn’t deserve to live to see a sequel.