No Abe Woodhull (Jamie Bell) must curb his temper and concentrate the bigger picture – winning the ear.

END_OF_DOCUMENT_TOKEN_TO_BE_REPLACED

Have you ever wondered what the series Psych would be like if it had been played as a drama? It might well have looked like The Mentalist [CBS, Tuesdays, 9/8C], a series about Patrick Jane, a former fraud television psychic who makes a major career change after a performance on a talk show takes a nasty turn. 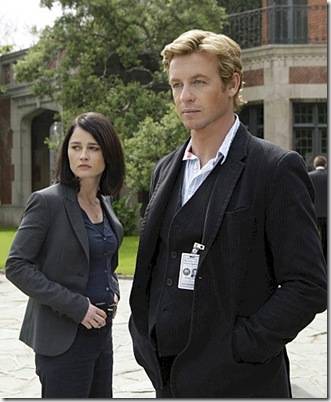 The premiere finds Jane, who is now working for the California Bureau of Investigation, solving a murder in the opening minutes by simply, as he puts it, “paying attention.” His methods, being somewhat unorthodox, his boss, Teresa Lisbon [Robin Tunney], suspends him – but a new set of murders appears to strike home to him and he goes over her head to get back on the case.

Judging by the premiere, The Mentalist is one of those shows that seem like it’s going to go one way and then, BAM! It’s snuck up on you and grabbed you by the throat! Unlike Psych, which places the humor upfront, The Mentalist seems like it’s going to be deadly earnest – and mostly, it is – but at key moments, shrewdly placed bits of gallows humor serve to both emphasize the drama and relieve the carefully built up tension.

David Nutter, a true king of the pilots [Millennium, Roswell, Dark Angel, Smallville, and Without a Trace, among them], really has a handle on Bruno Heller’s [Touching Evil, Rome] excellent script. Some of the key moments are [deliberately] predictable in order to set up the ones that aren’t – and he draws series defining performances from an ensemble that also includes Owain Yeoman [Kitchen Confidential, The Nine], Amanda Righetti [The O.C., Reunion] and Tim Kang [Third Watch, Rambo].

The Mentalist may be the series that gives Simon Baker the hit his talent and charisma deserve – and with its NCIS lead-in, it’s positioned well. The fact that it’s a police show – if not exactly a procedural – means that it takes a different tone than NCIS, but its quality should hold that show’s audience.