END_OF_DOCUMENT_TOKEN_TO_BE_REPLACED

War Games: The Dead Code is the straight-to-DVD sequel to the Cold War thriller starring Matthew Broderick as a teen computer whiz who almost starts World War III while under the mistaken impression that he’s playing a computer game. In The Dead Code, Matt Lanter is Will Farmer, a hacker who plays an online game called Ripley to win the money to go on a trip to Montreal with a girl [Annie D’Mateo, played by Amanda Walsh]. When his smartass best friend, Dennis [Nicholas Wright] up the ante while he’s not looking, Matt winds up catching the attention of the anti-terrorism computer program [R.I.P.L.E.Y. – voiced by Claudia Black] and being tagged as a potential terrorist. 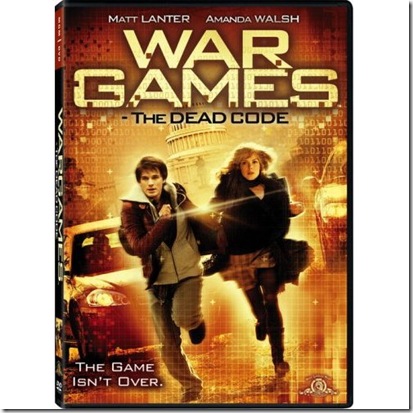 Unlike the threat of “Global Thermonuclear War” that powered the original, The Dead Code’s threat is bio-terrorism – and Will’s problems unfold because of odd coincidences – fixing his neighbor’s computer [and borrowing the stake for the online game] link him to a possible terrorist in the middle east, and because his mother works for a company that manufactures chemically-based household products [one failed attempt was for an odourless bleach], her unsuccessful prototypes making it seem like she is also a possible bio-terrorist.

The problem with The Dead Code is that Will’s situation spirals out of control so quickly – and on such flimsy evidence – that it strains credulity. Worse, Will’s pal, Dennis only exists for the express purpose of getting him into trouble and then making sure he stays there before vanishing from the proceedings. Then there’s the girl. Annie is going to Montreal to play in a chess tournament and doesn’t even know Will at the film’s beginning – and yet, she puts up with all sorts of crap because of him for no other reason than because he followed her to the French-Canadian city.

War Games: The Dead Code hits all its beats pretty much when it should as director Stuart Gillard tries to keep the action distracting us from the flimsiness of the plotting and lack of real characterization. What special effects there are, are used well, and solid performances from Colm Feore [Slings & Arrows] and Maxim Roy [ReGenesis], among others, are wasted here. Probably the movie’s only original moments are provided by the manner in which the original film’s Joshua Project factors into the proceedings.

Features include: Audio Commentary by Gillard and Lanter [boring] a Making Of Featurette, and a Production Stills Gallery [and no, trailers are not a bonus feature – they’re a marketing tool – unless they are the trailers for the actual film].