Eddie and Patsy are together again on the big screen for the first time. In their zeal to sign a high profile client for Eddie’s PR firm, they miscalculate gloriously (the only way they ever do anything…). Now they’re on the run – without a single clue as how to do that.

END_OF_DOCUMENT_TOKEN_TO_BE_REPLACED 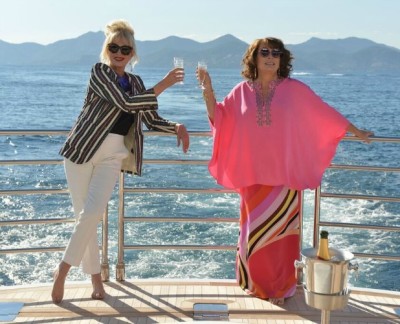 It’s been talked about for so long that it’s practically an urban legend, but Absolutely Fabulous: The Movie has finally happened.The first trailer riffs on every booze ad in the English-speaking world – suggesting that Patsy and Eddie are as too too much as ever.

The whole ever-so-slightly-blitzed gang is back! Check it out after the break. Absolutely Fabulous: The Movie opens on July 1st.