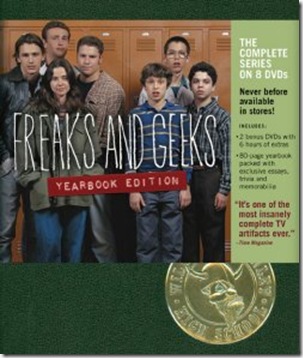 END_OF_DOCUMENT_TOKEN_TO_BE_REPLACED

It’s been twenty years since Heathers was released by a dying New World to critical acclaim and some box office success. Now, Anchor Bay has released the dark high school comedy as part of its Cult Classic Film Series. The film’s indictment of kids who will do anything to be popular – and become the ultimate jerks once they achieve it – is as grotesquely funny today as it was when it was first released.

Veronika [Wynona Ryder] is one of the Heathers – the most popular girls in school [the other three are all named Heather] – and the least ruthless. About the same time as she reaches her limit with her so-called friends, she meets a charismatic new guy in school, J.D. [Christian Slater] and becomes in embroiled in a series of murders that the two stage as suicides.

First-time director Michael Lehman and first-time writer Daniel Waters produced a terrific film with its own peculiarly daring sense of humor – and its own slang. With its budget constraints, what propels Heathers is the energy of its performances. Ryder and Slater have, frankly, never been better – And Shannen Doherty stands out as the shyest of the Heathers.