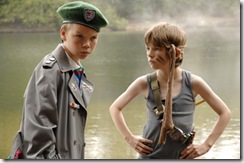 Will Proudfoot [Bill Milner] is a member of a religious sect that doesn’t allow watching television, so when his teacher plays a tape for the class, Will has to sit in the hall until it’s over. Lee Carter [Will Poulter], on the other hand, is the school’s resident hellspawn, who is frequently ejected from class.

The day after Lee has boldly videotaped First Blood at the town theater, he is ejected from class at the same time as Will is sitting in the hall awaiting the completion of a class film. A series of incidents involving a tennis ball and a few less than white lies later, Lee and Will are on their way to becoming friends – a process heightened when a hiding Will gets to watch Lee’s bootleg of first Blood and prods Lee, a budding filmmaker, to film “Son of Rambow.” Before long, a seemingly cool French exchange student named Didier [Jules Sitruk] has become a lead in the film; Will has become cool by association, and friction develops between Will and Lee.

The parts of the film that deal with the growing bond between Lee and will, and the relationship that Brother Joshua [Neil dudgeon] tries to build between Will and his mother [Jessica Stevenson], are charming and real in a low-key way. Didier and his entourage – who have become cool by hanging with him – are a clever bit at first, but wear out their welcome before long. [A clever insight into how his fellow French students see him comes just a bit too late for us to care overmuch.]

Writer/director Garth Jennings has a knack to getting to the kernel of truth in each of his main core of characters and directs with a slightly stealthy, not quite sprightly touch. If you’re tired of summer blockbusters already, Son of Rambow will probably going to charm the socks of you.