Originally a short film by Dez Vylenz for his film school thesis, The Mindscape of Alan Moore is an expanded ramble by Moore on various subjects – from Watchmen to the reasons he one day decided to tell his friends and family that he was a magician. 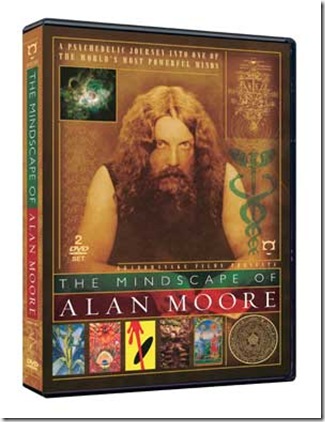 The format is incredibly simple: Moore sits on a comfy chair in his living room and speaks for almost ninety minutes. Given that he comes across as your favorite eccentric professor – the on whose lectures you never miss – this is not a hardship. Moore is an engaging speaker and is always witty and direct.

As he speaks, director Vylenz uses various means to enhance Moore’s subjects. There are some good old-fashioned psychedelic lightshow effects; CG animations that illustrate points Moore makes about concepts like “ideaspace,” and even live-action recreations of moments from some of Moore’s best known comics work: V for Vendetta [V putting on his unique mask], Watchmen [Rorschach perched on a rooftop looking out over the city], three instances of a blond guy in a trenchcoat, smoking as he wanders the streets of London [yup, it’s Constantine – though we only find that out in the end credits and the director’s commentary.

If you’re wondering what all the fuss about Moore is, The Mindscape of Alan Moore will give you a glimpse of his genius/madness – whichever you may take it to be. If you’re already a fan, it will give you some insights into the man that may actually enhance your enjoyment of his writings.

Grade: The Mindscape of Alan Moore – A