Last year’s mini-series The Starter Wife chronicled the events that led to Molly Kagan’s [Debra Messing] new, less wonderful life after her Hollywood producer husband, Kenny Kagan [David Allen Basche] told her he wanted a divorce. The mini-series did so well that USA decided to bring it back as an ongoing series [Fridays, 9/8C]. 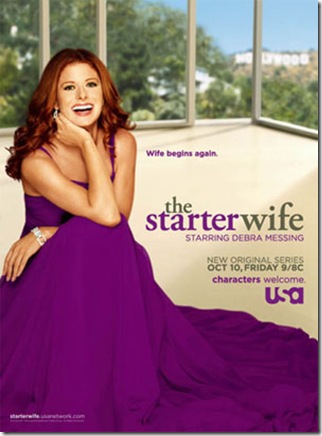 The series two-hour premiere finds Molly trying to get motivated as a writer, so she decides to take a writing class being given by bestselling author, Zach McNeill [Hart Bochner]. When she reads from her first children’s book, the class is quietly dismissive – though she does return for a second class where she reads from her journal – to very positive response. Positive enough that Zach invites her to a party where he can get her together with a magazine editor who is looking for a columnist with her skills. Not only does the party go badly for Molly, someone steals her journal and leaks bits of it to an influential gossip website.

Meanwhile, Molly’s friends, Rodney [Chris Diamantopoulos] and Joan McAllister [Judy Davis] have interesting problems of their own. Rodney’ interior decorating business is flourishing while his social life is a disaster. Joan is finding her sobriety difficult to maintain and when she takes a job at a posh rehab facility, her first assignment is watch over a faded movie star who is very creative in his approach to getting drunk.

Like most of USA’s “Characters Welcome” programs, The Starter Wife features a mystery – who stole Molly’s diary. Unlike the rest of USA’s shows, though, it goes more for the odd balance of soap opera storylines and dark humor –both of which Messing and Davis, in particular, can play adroitly. Those moments of pure soap melodrama are folded into a mix that gives the entire cast moments to shine but the success of the series rests squarely on the shoulders of Messing, who does indeed get all the best material [in her dreams she translates her many crises into versions of hit movies – Elizabeth and Mission: Impossible are among the films referenced in the premiere].

While the dark humor and melodrama work relatively well here, The Starter Wife does have a tendency to get a bit too frothy from time to time. If it keeps that tendency under control, the series should be able to hold an audience geared to the kind eccentric characters at which USA programs excel. If not, the show will be hard pressed to survive.