If you’re a fan of daytime television and have been following Guiding Light’s break through storyline over the past year between Olivia Spencer (Crystal Chappell) and Natalia Rivera (Jessica Leccia) affectionately know as Otalia, then you most definitely know about the fan forum Big Purple Dreams. BPD was created by a group of soap fans wanting a place of their own to gush over the burgeoning epic love story they were witnessing over at Guiding Light. Though Guiding Light is winding down and about to take its final bow, BPD is running strong and has no intentions of fading quietly once the show goes off the air. It’s become more than a fan forum, it’s a community of people who love and respect not only the story of Olivia and Natalia but also one another and have come together as a family.

Revisit the interview with the girls of Big Purple Dreams and see just how far this community of loving, passionate, die hard fans has come over the past year.

It shouldn’t surprise anyone that our favorite fan forum Big Purple Dreams reached another milestone over the weekend. As of yesterday, Big Purple Dreams reached 4000 members! That’s 4000 members in five months for a television show that has been canceled. Hey Lifetime, you might wanna keep an eye on this one, 4000 members in five months…just think what they could do in a year! The members of this fan forum are going exponentially rivaling any other fan forum in daytime or primetime for that matter so congratulations to BPD, Guiding Light and Otalia!

While the U.S. population make up a majority of those very fans, there is an impressive international following as well that most definitely needs to be acknowledge and praised. Guiding Light is being followed in at least 28 countries other than the United States from countries such as Australia, Bosnia, and Finland to Israel, Peru, and Wales. Keep in mind, these countries don’t receive a live feed the way U.S. audiences do. They aren’t even able to watch online from the CBS.com website the way U.S. viewers do either. To say the international following is dedicated is an understatement. Really, how many shows would you go out of your way to find that don’t show up in On Demand or cable reruns or download from iTunes? The international Guiding Light fans have none of that and yet they show up each and everyday to watch the show. They have also started their own international campaign to save Guiding Light with phone calls, emails, postcards and letter writing to join their U.S. family in the fight to save a show they love. I was lucky enough to sit down with several members of Team International over Skype (gotta love technology) to discus how they actually watch the show, differences in culture and how the international audience has a strong voice.

END_OF_DOCUMENT_TOKEN_TO_BE_REPLACED 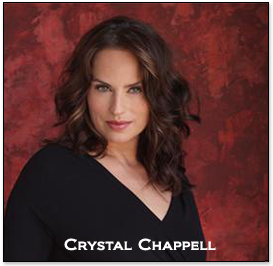 Calling all Crystal Chappell and Otalia fans! Come one, come all, today is a day you have all been waiting for. What day is that Tiffany? Well I’ll tell you dear friends. Crystal Chappell Podcast Day! That’s right folks, your favorite Guiding Light Goddess will be a guest on a very special edition of The Big Purple Podcast, the official Big Purple Dreams fan forum podcast, today May 7, 2009. BPD’s fearless leader and sexy voice Goddess herself, Destini, will be hosting the podcast this afternoon and assures me that it will be posted to The Big Purple Podcast site this evening.

When I talked to Destini last night I asked her what she hoped to get out of the podcast and she told me “I’m very excited to have this opportunity to chat one-on-one with the original Goddess herself, Ms. Crystal Chappell. It’s something the fans over at BPD and I have are looking forward to. My only concern is that I fear Crystal may try to kill me dead.”

Well there you have it folks! Be prepared to lose your minds when Destini (sexy voice #1) and Crystal Chappell (sexy voice #2) go head-to-head today May 7, 2009 and please don’t forget to be on the look out tonight for The Goddess Edition of The Big Purple Podcast. Let’s hope that Destini survives being Chappelled!

As most of you already know, last Wednesday Guiding Light, the longest-running scripted program in broadcasting history, was canceled. Fans of the show and quit frankly, the cast and crew were shocked and devastated by the news. The rest of last week was a difficult one that had everyone involved scrambling to make sense of the situation and wondering if there was anything that could be done to in fact save this beloved show. It is after all an American institution, an icon if you will.

Now that we’ve had a few days to snap out of our grief and start thinking clearly, we as fans can stand up and take this fight to the streets. We are determined not to go down without a fight. A show that has been part of the very fabric of our lives for 72 years isn’t going to brushed aside and put out on the curb like yesterdays trash. We’re standing up and yelling at the top of our lungs KEEP THE LIGHT ON!

Guiding Light has many passionate, loyal, loving fans ready to stand by its side and do whatever it takes to make this a successful campaign. One such fan has taken her voice and laid out her feelings in an open letter to all those in the industry who might actually have the foresight to pick up this rare jewel, brush it off and help it to shine bright once again. I hope you will read her letter and follow her lead! The only way to save Guiding Light is to be vocal.Write, call, email and let your voice be heard!

END_OF_DOCUMENT_TOKEN_TO_BE_REPLACED

If you’re a fan of daytime television and have been following Guiding Light’s break through storyline over the past year between Olivia Spencer (Crystal Chappell) and Natalia Rivera (Jessica Leccia) affectionately know as Otalia, then you most definitely know about the fan forum Big Purple Dreams. BPD was created by a group of soap fans wanting a place of their own to gush over the burgeoning epic love story they were witnessing over at Guiding Light. First came the Otaliafan channel on YouTube then the forum and after a few months, this little engine that could is nearly two thousand members strong and growing!

Recently I had the distinct pleasure of chatting with the three podcast mavens, Mel aka the cheerleader, Christi aka flowchart and Destini aka the sexy voice that lead this band of loyal, enthusiastic, and intensely passionate soap fans. The following is what took place or at least what I was allow to print…they’re a saucy bunch and I loved every minute of it!