Whether you’ve stumbled onto the work of Tung-Shing [Derek] Yee through his oddball romantic comedy The Truth About Jane and Sam, or the more uptempo revenge movie, One Nite in Mongkok, you will find something new and different with his latest film to reach DVD, Protégé. 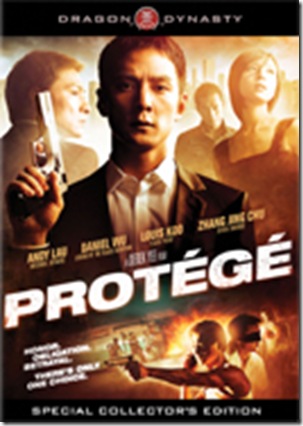 Protégé features Daniel Wu as Nick, an undercover cop who has become a vital component of drug lord Lin Quin’s operation. In a great piece of counter-intuitive casting, Lin is played by actor/singer Andy Lau, who breaks from his leading man/hero roles to play a decade older bad guy who, like Tony Soprano, loves his family but is ruthless in business.

Although Protégé is a gangster flock, it is not an action movie. Rather, it’s a closely examined character study. In the course of his investigation, Nick meets Jane [an excellent Zhang Jing Chu], a single mom whose drug habit makes her unreliable – and whose ex [Louis Koo] is constantly trying to get her back. Jane is a complication because Nick begins to care about her even as he fails to understand what could have led her to become a junkie. At the same time, Lin is suffering complications from diabetes and thinking of retiring and leaving his business in Nick’s hands. In Protégé, the characters are clearly driving the story.

Yee’s pacing is a hair faster than deliberate; he doles out information and character development in a fairly smooth manner. What bursts of action there are produce a greater impact in this otherwise much more controlled tale. More importantly, the action is derived from the character development.

Protégé is as much about honor, integrity and the possibility for redemption as anything. While I’ve seen this kind of movie from any number of international directors, this is the first time I’ve see it from a force in Hong Kong movies. Anytime I encounter a movie that draws me in and makes me ponder the value of friendship, the importance of honor and family, I figure it’s been a good day.

It’s been a good day.

Features: an engaging, informative and entertaining Audio Commentary by Hong Kong cinema expert, Bey Logan; The Making of Protégé featurette; Under & Over the Edge – Interview with Daniel Wu; Chasing the Dragon – Interview With Zhang Jing Chu; The Dealer – Interview With Producer Peter Chan, and the Original theatrical Trailer.