Ricky Gervais hosted the 67th Golden Globes Awards with the same prickly disregard for fakery he displayed when he appeared on The Tonight Show this past week [where he suggested that he plug all his projects up front in case NBC kicked Conan out a wee bit early]. 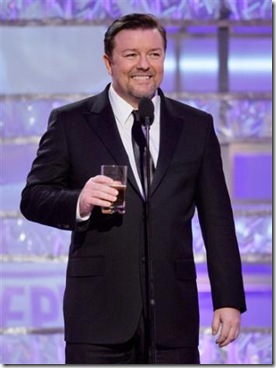 When he was not-so-gently ribbing stars like Mel Gibson [“I like a drink as much as the next man – except when the next man is Mel Gibson”] and Meryl Streep whose double nominations got one of the best bits of the night [something about being “greedily nominated” for It’s Complicated and Julie & Julia], he was flogging the DVD releases for the complete series of the British original version of The Office and his latest film, The Invention of Lying – or his upcoming animated series, The Ricky Gervais Show [on HBO].