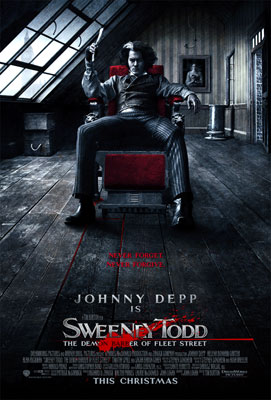 No one thought that making a movie adaptation os Sweeney Todd was a good idea, though they certainly tried for a long time. Finally, the legendary Sondheim play came [or fell] into the hands of the one director who could take its stylishly macabre tale and do it justice. With playwright Stephen Sondheim performing surgery to cut the three hour play to two hours for the film [and having casting approval] the big question was whether the dynamic team of Tim Burton, Johnny Depp and Helena Bonham Carter could make movie magic with the property. In short, they could and have and we are the beneficiaries of their twisted labors!

The story of Sweeney Todd has been around for a good, long time and has been told a number of times before the Sondheim play. The plot [a barber, wrongly imprisoned; a wife defiled and a daughter stolen; the barber’s return to exact his revenge] is pretty well known – even to those who’ve not seen the play [or even heard of it].

The question is this: how do you take such a tale from its hit play version and transform it for film? Burton and Sondheim [and screenwriter John Logan] have put together a great film by simplifying. Several songs are gone and several more have been truncated. We get Todd’s backstory in quick flashback – and then to the [ahem!] meat of the story. 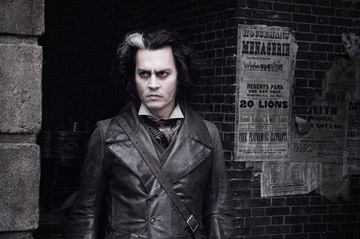 Despite the dark and forbidden atmosphere of the opening scenes, we are brought into the plot by a sailor singing a cheery verse of No Place Like London – before Sweeney Todd [Johnny Depp] steps forward and, with a second verse confirms London’s status, but for much different reasons. The sailor, Anthony [Jamie Campbell Bower], pops up later, to tell Todd of his daughter’s whereabouts.

Forward we rocket – to the home of The Worst Pies in London, Mrs. Lovett’s [Helena Bonham Carter] Meat Pies, where one thing leads to another and Todd has his only true [and very strange] ally. From there we zip along to blackmail, loss, wanton murder and cannibalism – all the elements of a great Christmas movie.

While the desaturated palette gives us only suggestions of an object’s former color [and thereby gives the rich red of the blood so much more pop], that technical aspect of film only works if we buy the characters, which isn’t always easy in any musical. Here, though, the lyrics are not adjunct to the plot – they are the plot – the characters’ conversation, thoughts and dreams. And even though Sondheim approved the cast, we probably wondered whether non-singing actors as Depp and Bonham Carter were really capable of pulling off this unusual and exacting work. 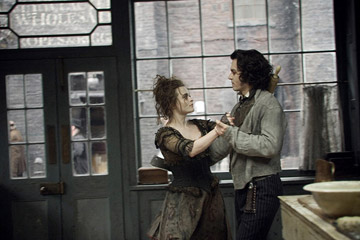 One of the best things about the film is that the cast is composed of actors who then sing. If they’re not always pitch perfect in song, they make up for it with brilliant acting performances [and, frankly, there aren’t very many missed notes, either]. Considering how demanding Sondheim’s music is, the cast’s performances are even more remarkable.

In terms of story, it is supremely easy to believe that Mrs. Lovett loves the former Benjamin Barker – even her unique disposal of the bodies of his victims, practical though she makes it seem, comes from her desire to help him gain his revenge [and if she’s suddenly selling a lot of unique meat pies, well then, so much the better]. The bringing together of Anthony and Johanna [Jayne Wisener] also works because the two young actors are convincingly in character. The fact that they sing like birds is, seemingly, almost a bonus. 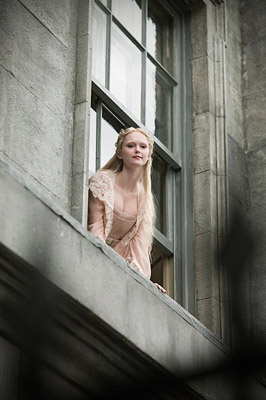 Between his palette and his eye for detail, Burton captures a grimy, ugly London – the kind of place where people like Turpin could subvert justice to their own ends without a second thought. Burton’s London is like a giant malignant tumor and, set against that backdrop, the main characters are reflections of it to one degree or another.

That there is this sweet love story between Anthony and Johanna is like finding a blade of grass growing through the asphalt of a parking lot. It’s enough to keep a little hope burning in the midst of the macabre nastiness and ultra-dark humor of the proceedings. The rest of the film plays out with inexorable Grand Guignol melodrama and irony – and the aforementioned humor. It even has what Charles Addams or Roald Dahl might consider a happy ending – though they would be in the extremely small minority!

One thought on “Sweeney Todd Is [Pardon The Expression] Bloody Good Fun!”