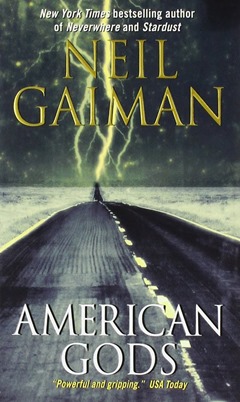 Starz is developing one of the premiere fantasy novels of the 21st Century for television – Neil Gaiman’s American Gods. This is a song we’ve heard before, but going by Starz’s record to development leading to actual programming (as with, for example, Outlander), the chances that we will actually see Gaiman’s epic novel of war between the new gods and the old on our screens have just gone up a hundredfold.

Adding to the general increase in positivity, Bryan Fuller (Hannibal, Pushing Daisies, wonderfalls) and Michael Green (The River, Kings, Heroes) will be American Gods’ showrunners and co-writers of the pilot script. The series comes from Fremantle North America (American Idol, A&E’s upcoming The Returned). For more details – including comments from Gaiman and Fuller – check out the press release after thee jump.

Starz Managing Director Carmi Zlotnik said, “‘American Gods’ is a project that deserves to be made.  With our partners at FremantleMedia and with Bryan, Michael and Neil, we believe we can create a series that honors the book and does right by the fans and viewers.”

Commented Neil Gaiman, "When you create something like ‘American Gods,’ which attracts fans and obsessives and people who tattoo quotes from it on themselves or each other, and who all, tattooed or not, just care about it deeply, it’s really important to pick your team carefully: you don’t want to let the fans down, or the people who care and have been casting it online since the dawn of recorded history. What I love most about the team who I trust to take it out to the world, is that they are the same kind of fanatics that ’American Gods’ has attracted since the start. I haven’t actually checked Bryan Fuller or Michael Green for quote tattoos, but I would not be surprised if they have them. The people at Fremantle are the kinds of people who have copies of ‘American Gods in the bottom of their backpacks after going around the world, and who press them on their friends. And the team at Starz have been quite certain that they wanted to give Shadow, Wednesday and Laura a home since they first heard that the book was out there.I can’t wait to see what they do to bring the story to the widest possible audience able to cope with it."

Thom Beers, CEO, FremantleMedia North America said, “’Neil Gaiman’s ‘American Gods’ is pure genius and we couldn’t be more thrilled to bring this classic to life on screen. Craig Cegielski and Stefanie Berk have put together a dream team with Fuller and Green joining Gaiman on this amazing journey. Coupled with Starz’ shared passion for this project, we’re confident this combination will raise the bar for drama.”

Commented Bryan Fuller, "Neil Gaiman has created the holiest of holy toy boxes with ‘American Gods’ and filled it with all manner of magical things, born of new gods and old. Michael Green and I are thrilled to crack this toy box wide open and unleash the fantastical titans of heaven and earth and Neil’s vividly prolific imagination."

The 2001 novel has been translated into over 30 languages and earned numerous accolades including Hugo, Nebula and Bram Stoker Awards for Best Novel.  The plot posits a war brewing between old and new gods: the traditional gods of biblical and mythological roots from around the world steadily losing believers to an upstart pantheon of gods reflecting society’s modern love of money, technology, media, celebrity and drugs.  Its protagonist, Shadow Moon, is an ex-con who becomes bodyguard and traveling partner to Mr. Wednesday, a conman but in reality one of the older gods, on a cross-country mission to gather his forces in preparation to battle the new deities.

FremantleMedia North America’s Thom Beers, Craig Cegielski and Stefanie Berk will executive produce the series along with Bryan Fuller, Michael Green and Neil Gaiman. Vice President of Original Programming Ken Segna will be the Starz executive in charge of “American Gods.” Starz will retain all network pay TV and SVOD rights to the project. FremantleMedia will distribute the series worldwide.

FremantleMedia North America (FMNA) is the U.S. arm of global media giant FremantleMedia, which includes a distribution arm, FremantleMedia International, a digital and branded entertainment division and a kids & family entertainment business.  As one of the world’s largest and most successful creators, producers and distributors of TV  brands in the world, FremantleMedia’s comprehensive global network has operations in 28 countries, creating over 8500 hours of programming a year, rolling out more than 60 formats and managing over 400 individual titles. The company also distributes more than 20,000 hours of content in over 200 territories. FMNA and its portfolio of companies, including Original Productions and 495 Productions, produce entertaining and innovative scripted and alternative programs for network, cable, syndicated and online platforms. Their slate includes the upcoming “The Returned” (A&E) and “Celebrity Name Game” (SYN), as well as a diverse range of both critically-acclaimed and award-winning successes including “American Idol” (FOX), “America’s Got Talent” (NBC), “Family Feud” (SYN), “Let’s Make A Deal” (CBS), “The Price Is Right” (CBS), “The Great Christmas Light Fight” (ABC), “Deadliest Catch” (Discovery), “Party Down South” (CMT), “Ice Road Truckers” (HISTORY) and “Storage Wars” (A&E) among others.