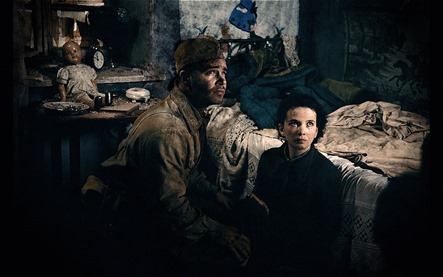 Stalingrad is an outstanding war movie because it takes one isolated group of people in the middle of the most epic battle of World War II and tells their story. In that way it is kind of the Russian Saving Private Ryan.

Stalingrad opens in the recent past, with the tsunami disaster in Japan and brings it down to a personal level with a man telling five teens trapped under a collapsed building a story about his five fathers – and then telling this small, personal story of five members of the Russian army and navy and this one girl in the middle of the horrors of war…

The film shifts from modern Japan to the battle for Stalingrad. An explosive (literally) sequence finds the Russian army storming a Nazi installation after an error has put thousands of gallons of flaming petrol between them. The sequence is brutally beautiful as the Russians pour through the flames, many fighting while afire. This sequence establishes the scale of the battle before we shift to a partially destroyed building in the city.

There, a ragtag group of Russian soldiers and sailors seek shelter and discover a young woman living in a mostly undamaged apartment. Over the space of a few days, they bond as they attempt to slow the advance of the Nazis. 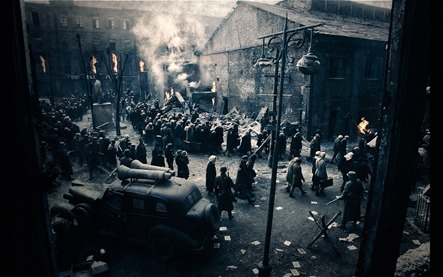 The girl is Katya (Mariya Smolnikova), the only person left in the building – who has had to bury her family and neighbors. If there is a personification of the will to live, she is certainly that. Her new surrogate family includes Sergey Astakhov (Sergey Bondarchuk), Chvanov (Dmitriy Lysenkov), Polyakov (Andrey Smolyakov), Nikiforov (Aleksey Barabash), and Krasnov (Oleg Volku). In a weird happenstance, she actually recognizes Nikiforov – he was an opera singer she had seen perform live before the war.

Over the course of a few days, each of the five comes to love her – some in a romantic sense, some as brothers or fathers. Three of them even go so far as to tote a bathtub back for her while taking fire from the Germans. She, of course, falls for one of them – the one who teaches her to shoot a rifle and has the worst sense of humor.

On the German side, there’s the conflicted Kapitan Kan (Thomas Kretschman) who is appalled by the actions of his superior, a Nazi true believer (he orders a group of captured women and children burned alive). Kan occasionally steals away to find solace in the arms of a beautiful Russian prostitute named Masha (Yanina Studilina) – a woman we can see he has actually come to care for.

The balance of the brutality of war and the tenderness of the personal story folded with Stalingrad make it almost a kind of companion piece to Saving Private Ryan. Each takes one of the biggest battles of WWII and wraps it around a story of human resilience and dignity. 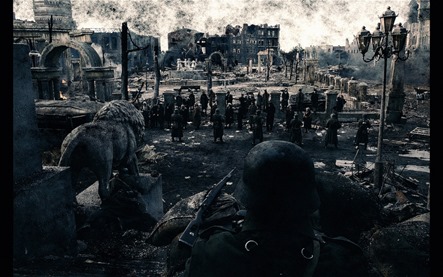 In the case of Stalingrad, while we might not have remained allies with Russia after the war, that doesn’t mean they didn’t have their stories – nor does it mean they weren’t as powerful and meaningful as ours.

Director Fedor Bondarchuk, working from a script by Sergey Snezhkin and Ilya Tilkin, has made what is one of the best, most compelling war movies in decades. Both the epic scale of the battle sequence and the human story within work.

Stalingrad is brilliant and beautiful and savage – and possessed of that unique melancholy that seems to permeate the Russian people just under the surface.

When I got home from the screening I had to immediately check the Oscar nominations for Foreign Film to confirm that Stalingrad hadn’t made the final five.

Everything about it worked: the performances were incredible; the writing was top notch; the effects were superb; the 3D was fine – even in the murkier sequences (that usually doesn’t happen), and the editing and direction were stellar.

I saw it in IMAX 3D at a critics’ screening, with maybe half a dozen people in the audience, and really can’t imagine seeing it any other way. It really helped delineate the contrast between the massive horror of war and the intimate beauty of the personal stories. Even at the premium price for IMAX 3D, I’d see it again in a heartbeat.