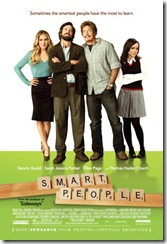 Lawrence Wetherhold [Dennis Quaid] is a tenured English professor at Carnegie Mellon University who can’t be bothered to learn the names of his students – and is utterly ruthless when marking their papers. His daughter, Vanessa [Ellen Page] is kind of Bizarro World counterpoint to Juno – all brains and Young Republican and needy. Lawrence has never gotten over the death of his wife and is in a kind self-induced personality freeze. Because Vanessa wants her father’s approval – or even for him to acknowledge her existence in some meaningful way – she has become a younger, female version of his damaged persona.

When he goes after his briefcase in the campus impound lot and suffers a seizure as a result of a head injury as he flees the lot attendant, resulting in his driver’s license to be suspended for six months. Then, the insurance company refuses to cover the cost of a chauffeur – allowing Lawrence’s adoptive brother, Chuck [Thomas Hayden Church] to move in and become his intermittently adequate driver.

Chuck is a layabout, drifting form job to job and place to place. Though he is certainly as smart as his brother and niece, he’s also lazier and far less motivated. In some ways, he’s just as damaged as they are.

Janet Hartigan [Sarah Jessica Parker], the ER doctor who treated Lawrence, turns out to be one of his former students. Apparently his passion about teaching [long since gone when he meet him] really affected her – to the point that she had a crush on him. Once Lawrence learns this, he begins an awkward courtship that spins out of control early on when she realizes he hasn’t let her get a word in edgewise for over forty-five minutes.

Meanwhile, Chuck has gotten to Vanessa to let her guard down for unexpected moments of fun, especially when he persuades her to celebrate being accepted at Stanford. Somehow, she gets the wrong impression about his motives and more awkwardness ensues. 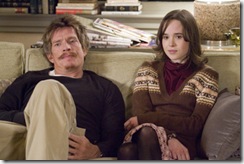 Throughout, Lawrence’s son, James [Ashton Holmes] exists on the fringes of the story, trying to avoid being with his family as much as possible because he realizes how screwed up they are – and really doesn’t need that kind of grief in his life. He is marginally less damaged than the rest of them, but he knows that and is trying to change things for himself.

Smart People is one of those weird little films that doesn’t try to overwhelm its audience with slapstick or melodrama. It’s a quiet study of four people whose intelligence doesn’t quite equate with perceptivity.

Lawrence has dug himself into a rut, personally and professionally. When his ego requires him to nominate himself for head of the English Department even though he’s head of the nominating committee, he is completely unprepared for the revelations that will follow. His attempt at wooing Janet is heartfelt but obtuse.

Vanessa is more concerned with getting a perfect SAT score and her New Republicans meetings than anything so esoteric as “fun.” When Dr. Hartigan calls her about her father’s accident, her response is to treat her like a telemarketer [Janet asks for Mrs. Wetherhold, not knowing that Lawrence is a widower] and rudely hang up after excoriating her.

Chuck has a sense of humor and clearly recognizes how damaged he is, but prefers his fun brand of damage to the intellectual, self-absorption of his brother and niece. Even while he tries to get them to lighten up, he finds himself staying in James’ dorm room a couple nights a week – just to get away from them. As Chuck, Church steals almost every scene he’s in – at least the comedic ones. He defers, slightly to the others in the more dramatic scenes, but adds a certain weight to them as support. 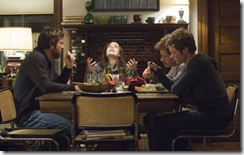 Unlike Vanessa, James reacts to his father in almost exactly the opposite manner. He’s more relaxed and ignores them when they get to be too much. He doesn’t live with them, and values that aspect of his life. He also wants to be a poet – an aspect of him that Lawrence is completely unaware of [and the best poets seem to be damaged, so for him it’s a plus].

Then there’s a book that Lawrence has been peddling for quite awhile – and what happens when The Penguin Group decides they want to buy it. This leads to both consternation for Lawrence and possible freedom for Vanessa, who has only just begun to realize that there’s more to life than books and politics.

Janet has an arc that leads to an awkward Christmas dinner at the Wetherhold residence and a revelation that adds impetus to chuck’s efforts to get Lawrence and Vanessa to change. Parker plays Janet with next to no makeup, and to good effect. She comes across as a moderately successful girl next door – and someone you could see having a crush on Professor Wetherhold in his more passionate days.

It’s a bit of a cliché to describe performances as nuanced, but it’s totally applicable here, where the characters change and grow in the tiniest possible increments. Unlike most films, Smart People doesn’t take it for granted that the Wetherholds and Janet will live happily ever after. In fact, once we leave the theater, we’re not certain that they will be significantly better off, either.

Mark Poirier’s script is lighter on laughs than it could be, but provides several smiles as we recognize elements of the characters’ behavior that we’ve seen [or exhibited ourselves] in real life. It is filled with small moments that crystallize the realizations of the characters [though none has anything as completely revelatory as an epiphany] – realizations that spur small changes, but more than one might have expected.

The overall tone of the film is a bit depressive for my taste, though it does serve to highlight the film’s many moments of warmth and good humor nicely. The best description for Smart People is that it’s a dramedy – though it does lean more to the dramatic side of the scale.

As a whole, Smart People does, at times feel like two movies – one kind of pompous, and one kind of fun – but its overall effect is one of small truths [as in there’s no guaranteed happily ever after – or even happily at times] and makes its points gently, but inescapably.

One thought on “Smart People: The Smug and Self-Satisfied vs. The Rest Of Us”