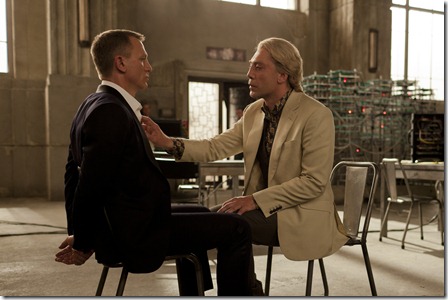 Skyfall opens with what seems to be a traditional Bond mission sequence: someone has stolen a hard drive – killing two agents and leaving one mortally wounded – and Bond (Daniel Craig) has to chase after him. He is being assisted by a fellow MI6 agent named Eva (Naomie Harris) who drives with reckless abandon and wields a rifle under trying circumstances. She comes across as competent – if not necessarily up to Bond’s level – and reappears later to help him make a play in Macau.

If you’ve seen any of Skyfall’s trailers or TV spots, you already know that – despite an exciting chase through Istanbul’s Grand Bazaar (even taking to the rooftops on motorcycles!) and onto a speeding train – this is one mission where Bond not only fails, but appears to have been killed. The hard drive? It contained the names of every NATO operative working undercover and infiltrating terrorist organizations around the world.

Cut to sometime later and someone has infiltrated MI6 and blown their offices up before a stunned M (Judi Dench). When Bond hears the news, he leaves the tropical paradise where he has been recovering from the bullet and fall that nearly killed him. He returns to London where he reports for duty in a most peculiar manner and tweaks her about the obituary she wrote. Despite his being ‘not fit for duty,’ M sends him after whomever obtained the hard drive.

Cue a trip to Shanghai and Bond’s rematch with mercenary Patrice (Ola Rapace) and the introduction of Sévérine (Bérénice Marlohe) (seen in a neighboring building); another trip – to Macau – and Bond persuading Sévérine to take him to the big boss, Raoul Silva (Javier Bardem). 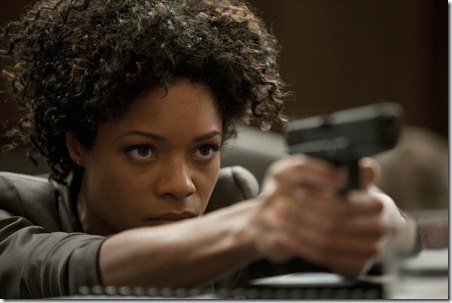 Sam Mendes might have seemed an odd choice to direct a Bond movie, but the Oscar® winner isn’t completely unfamiliar with action sequences (see: Jarhead), and he strikes a fine balance between the expected action set pieces (that opening chase sequence is only one of several) and the film’s equally important character beats.

Working with cinematographer Roger Deakins, Mendes has crafted a film that looks great, flows beautifully and plays some cool variations on the usual Bond movie tropes. He also finds excellent use for an old friend – the famous Aston Martin DB Mark III from Goldfinger; the one with the ejector seat – which leaves M, like Queen Victoria, not amused (her comment is one of the better lines in the film and Dench delivers it with just the right withering weariness).

Skyfall isn’t just a cracking good time, or a fun ride. It also has something to say about the need for operatives of Bond’s ilk when a computer wizard might be able to reduce whole countries bankrupt with a keystroke, or hack into command centers that control nuclear weapons, or any number of other bits of cyber-terrorism. That this need for someone to send a message – a trigger to pulled (or not – as Bond points out, ‘A computer can’t decide that’) – revolves around the more or less fallen center of a once great empire suggests that it’s also a bad idea to underestimate anyone – or any country.

Even though the script – by Neal Purvis & Robert Wade and John Logan (who has been signed to write the next two Bond movies) – is mostly solid (if you feel like yelling ‘Just kill the mothersticker already!’ at the screen, you’re not alone), there are a couple of moments where the movie does get momentarily frustrating. The final big action set piece is tons of fun, but could have been right at home in one of the Pierce Brosnan entries in the series.

Minor quibbles aside, Skyfall not only rockets along at a fierce pace, it also brings back a bit (just a bit) of the quippy humor that’s been missing from the first two Daniel Craig movies – though not all the good lines are Bond’s. 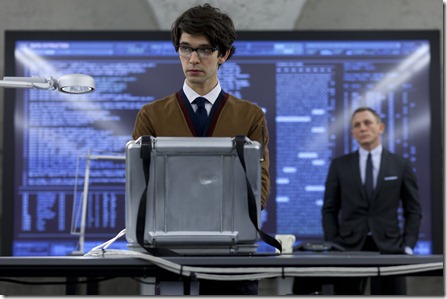 Javier Bardem, with his suicide blond looks and sensual presence makes Raoul Silva one of the best Bond villains ever. Silva is not the typical mad scientist or would-be conqueror. He is more unsettling and mercenary than merely evil, or intimidating. He is chess master, plotting moves far ahead of his opponents – making grand use of his unexpected (and ingenious) connection with M’s past. He is a master of the unsettling – in a word, uncomfortable.

The film also introduces the new Q (Ben Whishaw), a tech nerd with a brash sense of humor and the brains to back it up. His introduction to Bond is a terrific scene that is even better than the trailer suggests.

Ralph Fiennes is also new to the series, playing Gareth Mallory – a bureaucrat who is trying to ease M into retirement, but has substantially more to offer than mere paper pushing. Over the course of the movie, Mallory has one of the film’s most intriguing arcs.

And, finally, there’s the legendary Albert Finney in a role about which I shall say nothing other than that he’s a key player in the film’s last act – and is superb.

It’s a shame that there are a few minor quibbles to mar what is one of the best Bond films but, even so, Skyfall is one helluva ride – and filled with all kinds of cool revelations.

The screening I attended was in an enhanced theater that, while not being IMAX, has a screen that is perhaps a third again as large as the usual and exquisite sound. The result was a presentation that definitely grabbed my attention and made the film’s two-hour, twenty-three minute running time seem much shorter (once again, I never finished my drink – a large diet cola – a sure sign that I was totally hooked by what was happening onscreen).