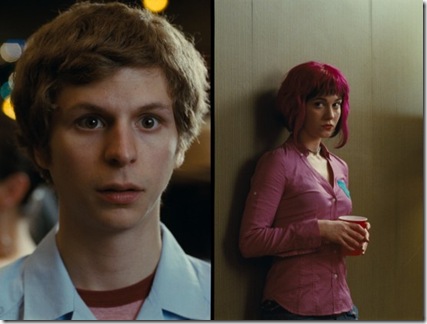 Scott Pilgrim vs. The World is an 8-bit, rock & roll, multi-period, anime´, kung fu teen romance – which is to say that it’s a genuinely unique movie experience. Short form: Pilgrim falls in love with a girl in what he thinks is a dream, meets her at a party and stalks her until they fall in love, then has to deal with her baggage [seven evil exes] as well as his own [the girl who dumped him went on to become a rock & roll goddess].

Right now, as the colors and video effects and 8-bit game-inspired sounds and whiz bang action set pieces and genuinely romantic exploits of Scott Pilgrim [Michael Cera, changing his image for the better here] and Ramona Flowers [Mary Elizabeth Winstead – why isn’t this woman a big star, yet?] have me glowing like a radioactive isotope. If I’d had the time and money, I would have gone right back to the box office and bought a ticket to the next show. You can put me on record as saying that Scott Pilgrim vs. The World is, as of right now, tied with Inception for best film of the year so far!

Made on a budget of $80 million, Scott Pilgrim is like nothing you’ve ever seen before – while looking like everything you’ve ever seen before. The relationship building between Scott and Ramona may be as true as any good romantic drama of the last five years. The onscreen depiction of sounds [phones ringing, bass guitars thundering, drums pounding, punches and kicks landing – even doorbells ringing] might remind of devices used in that ‘60s Batman series, or even Timur Bekmambatov’s Night Watch – but it has a resonance that fits in with the film’s manga/anime´ and king fu sensibilities, while framing actions in a fresh way.

The works of Scott Pilgrim is as fascinating as its central couple – phones and computers are all late eighties/early nineties; cars and buses [when we see them] are relatively contemporary; coffee shops may look eighties, but their equipment is up to the minute. The juxtaposition of modern and not so much makes Scott’s world one where it feels right when Scott is challenged by Ramona’s seven evil exes – and characters turn into coins, a la video games, when they die in combat. 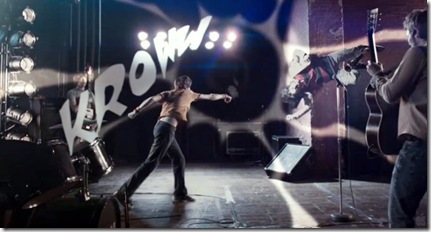 The graphic novel’s humor translates to the screen really well, too, as when little boxes pop up, identifying characters, or when Scott’s “fake high school girlfriend,” Knives Chau [Ellen Wong] faints while watching Sex Bob-Omb perform in a battle of the bands.

In the graphic novel, Scott is a bit of a jerk – whining when he’s told he has to break up with Knives if he wants to date Ramona [“But it’s so harrrrrd,” he moans]. Ramona doesn’t get off scott free, either [forgive me, it was there…]. Turns out she was the one who broke up with her league of evil exes. She’s trying to leave that whole bitch thing in the past.

Edgar Wright [Shaun of the Dead, Hot Fuzz] has recruited one helluva cast for the film: Chris Evans, Brandon Routh and Jason Schwartzman are three of Ramona’s evil exes; Alison Pill is Kim, drummer for Sex Bob-Omb and an ex of Scott’s from high school; Anna Kendrick [Out of the Blue] is Scott’s impatient sister, Stacey; Kieran Culkin [Igby Goes Down] steals every scene he’s in as Scott’s gay roommate Wallace; Aubrey Plaza’s [Parks and Recreation] Julie rocks when she’s giving Scott grief; Brie Larson [United States of Tara] is perfect as Envy Adams, rock goddess and the girl who broke Scott’s heart, and so on and so on… There really aren’t any weak links here.

Wright has proven his ability to get nuanced performances in the context of a comedy, but here, he takes multi-genre film and kicks things up several notches. His fight scenes are exhilarating; the character scenes are involving and, yes, the comedy crackles. Few directors start their careers with three straight excellent films. Other than Wright and Jason Reitman, I can’t name any, offhand.

Like Reitman, Wright has started well then gotten better. Scott Pilgrim vs. The World is more kinds of great ride than you’ll find in a dozen carnivals. The movie’s only flaw is Sex Bob-Omb. They’re really actually pretty good.