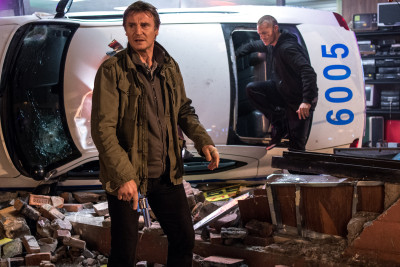 Shawn McGuire is a former crime boss who has gone legit. Jimmy Conlon is his former button man who drinks to kill the memory of the faces of those he killed for Shawn. Shawn still keeps him around – takes care of him, really – because of their deep friendship.

That all ends when Jimmy kills Shawn’s son – a true dirtbag – to keep from killing his own son. Cue endless chases, fights and gunplay.

After a first act that shows us the relationship between Shawn (Ed Harris) and Jimmy (Liam Neeson) – the most fascinating part of Run All Night – things go wrong when Shawn’s son, Danny (Boyd Holbrook) tries to set up a business transaction between his dad and a couple of Eastern European’s who plan to import 94% pure heroin into the country through the New York port where Shawn has the power to see that their shipments get through unmolested. Unfortunately, Shawn really has gone legit and shuts Danny down, hard.

The would-be drug importers hire a limo – driven by Jimmy’s son Michael (Joel Kinnaman) – to pay a visit to Danny’s home to get their money back. Danny kills them, but Michael sees him and splits. Danny and his best friend go to Michael’s home. Jimmy is just leaving when Danny breaks in the back door and is about to shoot Michael when Jimmy shoots and kills him.

Jimmy warns Michael not to call the police, but he does and finds himself framed for Danny’s death before Jimmy chased down to police car and frees him. Jimmy, of course, honoring his relationship with Shawn tells him what really happened. Shawn doesn’t take it all well. 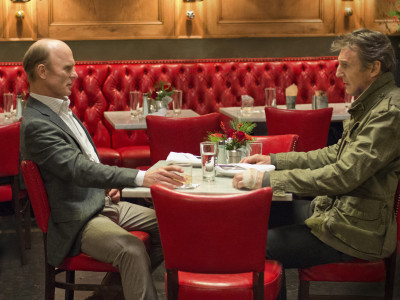 There are peripheral arcs: Michael trains a talented kid called Legs in the pugilistic arts; Shawn had told Danny to stay put but he wouldn’t – again totally misreading his father; Michael’s family has to leave town to keep safe; the town’s One Good Cop, Detective Harding (Vincent D’Onofrio) is still trying to pin a series of murders on Jimmy, but they’re mostly window dressing.

The majority of the movie, after the first act, is Jimmy and Michael on the run and various cops (good and bad) and a meticulous assassin (Common) chasing them with intent (Harding wants them alive but no one else does).

The script, by Brad Inglesby (Out of the Furnace), sets some great ideas in the opening act but pretty much abandons all of them when the action shifts into high gear.

Director Jaume Collet-Serra – who has directed Neeson in to previous (and better) action flicks (Unknown and Non-Stop) – doesn’t really do much that we haven’t seen before, though he does have fun with the initial car chase (the cops are the ones being chased).

Neeson and Harris lend a certain gravitas to the proceedings, great actors who do not for a second seem to be slumming. Kinnaman shows he has some chops and enough charisma to become a star if not for his unfortunate choices in projects.

D’Onofiro, Genesis Rodriguez, Bruce McGill and a small host of very talented supporting actors are given one-dimensional characters and, for the most part, fail to elevate them above the material – only D’Onofrio manages – seemingly through sheer will power.

In the end, Run All Night squanders its intriguing opening and a talented cast to wind up little more than just another action movie.