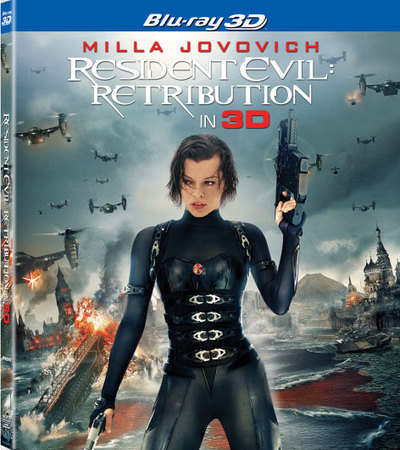 While it is not a critical success, I’m a sucker for the Resident Evil movies. They are fun, fairly innovative in terms of fight choreography and Milla Jovovich is just awesome as Alice. She owns the screen and kicks all sorts of ass. It’s rare blend of perfect actor/actress for the part.

It doesn’t always make sense, but do you really watch a movie like Resident Evil: Retribution expecting quality writing? I certainly don’t. What I want to see is lots zombie action and if it is innovative even better. Director Paul W.S. Anderson can be criticized for many things, but the one thing he does so well is the action and clearly has a vision. The end sequence features one of the most brutal and intense fights of the year – maybe the last few years.

The story this time is small and simple. Alice attempts to break out of an Umbrella base that is filled with simulated environments and lots Zombies. This time the Zombies actually seem to be a little smarter, organized and certainly faster. They run! Running Zombies!

One thing Paul W.S. Anderson does so well in the Resident Evil Series is give you the scope of everything. He starts small within the confines the Umbrella Corporation’s base and does the pull out so we get to see the full scale of the operation. It is always a pretty cool moment when you realize how daunting it is to get in and out of these places.

Several fan favorites from previous films including the evil former leader of Umbrella Wesker (Shawn Roberts), Jill (Sienna Guillory), Rain (Michelle Rodriguez) and even Luther (Boris Kodjoe). For fans of the video games we finally get to meet Leon (Johann Urb) and Ada (Bingbing Li). Kind of funny that they never did this before since cloning was already established in prior installments. Now anyone can come back from the “dead.”

Since we know that these are simulated environments, it frees Anderson to play around with the transition effects and the obvious CGI backgrounds, but he over does it a bit during the transition shots. At times it takes you out of the movie when you see the computer environment being drawn in. I understand what he was going for, but one or two shots would have been enough.

This series isn’t for everyone, if you don’t like previous installments; this movie isn’t going to change your mind.  It delivers exactly what you expect, nothing more, nothing less. The movie ends once again with the classic Anderson teaser shot of more thrills and danger to come. As a fan of this series I’m down for more, but think it is running out of steam and time to wrap things up with a bang.

The 2:40.1 transfer is a exactly what you’d expect from a modern day film (that was probably made digitally) put on Blu-ray. It looks great, but all the digital sfx makes the film look little cold. The 3D here is nearly flawless; there was no fuzz or clipping around the edges. From a filmmaking perspective the 3D did not add anything to the movie, but it also didn’t take anything away.

Since the movie was shot in 3D everything thing looked mostly in proper proportion. There were a couple of instances where the CGI characters looks a bit smaller than they should have been during some of the action shots. The Dolby 5.1 audio sounded fine, again nothing to shout aloud about. But I always loved tomandandy’s musical score. The base just thumps during key moments.

This set comes on two discs. Disc 1 features both the 3D and 2D versions of the Blu-ray, along with five deleted and extended scenes that are fully finished (including 3D elements), and two commentary tracks one with Paul W.S. Anderson, Milla and other cast and crew.

Disc two contains 6 featurettes (totaling 50 minutes), trailers Capcom Games (RE 6 looks really cool) and an interactive database.  There is also an Ultraviolet digital copy version of this movie (I’ve given up my righteous crusade against Ultraviolet).

As a Resident Evil fan, I enjoyed this Blu-ray. There is enough on here to keep you busy. I love that the 3D and 2D versions are on the same disc, but this is such a short movie I’m not sure it is worth purchasing as a stand-alone film. It is definitely worth a rental. If you don’t have the other 5 films, I would seek out the entire Resident Evil Box set ($59 on Amazon and other places) instead of getting this as an individual disk.