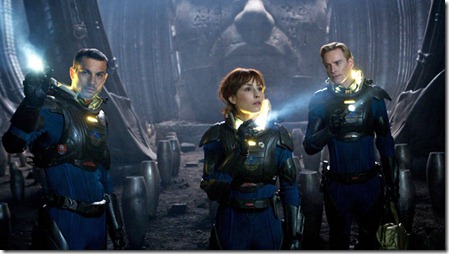 Ridley Scott returns to the Alien universe with a spectacular movie that asks the big questions and suggests the possibility that we might not like the answers.

Set many years before Alien – though it actually isn’t a direct prequel (as Sir Ridley repeatedly stated) – Prometheus finds an anthropologist, Dr. Elizabeth Shaw (Noomi Rapace), and her boyfriend Charlie Holloway (Logan Marshall-Green) ostensibly leading a scientific expedition to the moon of a distant planet in hopes that they will find the aliens who created humanity.

I say ostensibly because their transportation – a trillion-dollar spaceship called the Prometheus (after the Titan who stole fire from the gods to give to humanity) built by the Weyland corporation – comes with a senior member of the corporation’s board, one Meredith Vickers (Charlize Theron) aboard, and she has other ideas.

Led by a pictograph that appeared in half-a-dozen ancient cultures’ written languages – cultures that has no way of knowing of each other – Shaw, a True Believer, and Charlie, a stalwart Darwinist, hope to find out why we were created, why we are here and where we’re supposed to be going. The Big Questions.

From the film’s opening scene – a humanoid watching a humongous craft head into space before imbibing a peculiar, semi-liquid substance and then changing into something grotesque that disintegrates and falls into a waterfall – it’s clear that Scott, working from a script by John Spaihts (The Darkest Hour) and Damon Lindelof (Lost, another project that did not answer a lot of questions…), wanted Prometheus to be the 2001: A Space Odyssey of the alien universe.

One answer we do get is what/who was the Space Jockey from the original Alien – and it’s a doozy of an answer, too, and leads to that answer we might not have wanted.

Prometheus is filled with mindbending shots and sequences – the opening sequence is but one of several. The revelation of the sculpture of an enormous human head in a roomful of what Captain Janek (Idris Elba) refers to as ‘vases’; the structure which houses the sculpture room; another room in which the robot, David (Michael Fassbender) discovers something wondrous – and which elicits from him a look of real wonder (making us wonder if there’s more to this robot than we’ve been told). Visually, cinematographer Darius Wolski and the effects team have created a memorable film under Scott’s direction. 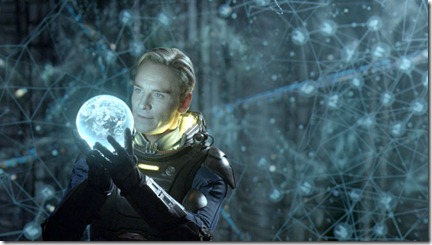 Speaking of David, he is the only other character besides Shaw, Holloway and Vickers who has any depth at all. While the Prometheus was in transit, the crew was in stasis and David ran the ship. We see him learning dead languages, shooting hoops while riding a bicycle and checking the health of the crew.

He seems to be a kind of cross between 2001’s Hal and Wall*E – seemingly dispassionate and therefore fearless, he also displays delight and wonder and even, in a surprising case, an affectionate protectiveness. He, like Wall*E, finds a particular film instructive – in this case, Lawrence of Arabia. His emulation of Peter O’Toole’s Lawrence may help serve to hide any genuine emotions he has (‘the trick is not to mind the pain…’) by giving him a seemingly manufactured persona that we may, or may not, be able to see through (maybe Pinocchio is a real boy, after all).

Rapace is not just a fervent True Believer (she wears a necklace made from a cross that belonged to her father), she’s also willing to be challenged and every bit as tough and resilient as Sigourney Weaver’s Ripley – in fact, considering what she goes through, maybe even tougher! It speaks volumes that she’s fallen in love with a Darwinist – and that he fell in love with her.

Best known for TV (Dark Blue, Traveler), Marshall-Green makes Holloway a fun-loving guy who knows when to get serious. He’s capable of the kind of sacrifice you might expect of a True Believer, which he is – only his belief is in the evidence that supports Darwinism.

Unfortunately, the film drags in spots; much of the dialogue could be improved upon, and there are a few plotholes (which we will leave you to discover on your own, because whatever its flaws, Prometheus is still a stunningly beautiful film).

Much of the second act could have been tightened up – and since the film was so determined to be talky, much of what could have been cut could have been just as easily replaced by Peter Weyland’s (Guy Pearce) TED speech (which you can find on YouTube). Instead, we get a minute or two of Pearce as a hologram of the aged, dying Weyland in an early sequence.

Even the nasty creatures that remind of Alien – without copying the Giger original – and the frenetic action in the last act can’t quite make up[ for the film’s flaws, though it is still a brilliant experience in the beautifully used 3D. Still, considering what Scott was aiming for, Prometheus delivers a good deal of it.

One thought on “Prometheus Is Spectacular!”