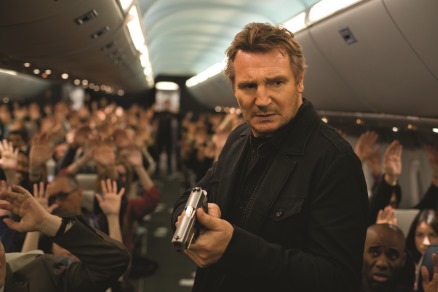 The cast and direction of Non-Stop are first-rate. They are infinitely better than the material they’re working with.

Bill Marks (Liam Neeson) is the last person we’d want as an air marshal on a trans-Atlantic flight. We see him take a rather large swig of something alcoholic – and lace a cup of coffee with it – just before he boards a flight from New York to London. Along the way, we learn he has a pretty checkered past.

When someone hacks the closed network on the plane, after takeoff, to send him a text that the sender will kill someone in twenty minutes unless he arranges to have $150 million deposited into a certain account, he tries to do something about it, but the flight crew and his fellow air marshal (Shea Whigham) don’t believe him. 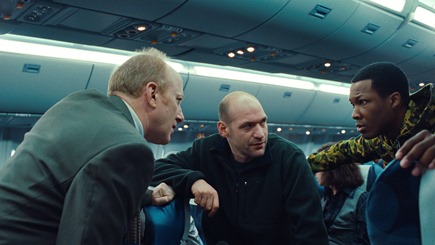 As we proceed, it becomes that the would-be killer knows a great deal about Bill. We never really learn exactly how. Just about the only people he can trust on the flight are the passenger in the next seat, Jen Summers (Julianne Moore), whom he can see didn’t send the texts, and a flight attendant named Nancy (Michelle Dockery) whom he has known for years.

As things escalate, he has to kill a man and hide the body – not something that’s easy on an airplane. How he does it strains credulity quite a bit, let’s go with it. Next he has Nancy and Jen scan the passengers from a set of viewscreens in the galley and let him know if anyone is using a phone – or even looks like they might be using one.

Naturally, there are a number of people who come under closer scrutiny – though, of course, the ones who most look like they might be up to something aren’t. But let’s look at some of those people: a seedy looking bald guy (Corey Stoll), an angry black student-type (Corey Hawkins), a Muslim doctor (Omar Metwally) and suddenly, yes, we’re racially profiling. Maybe they’re red herrings; maybe they’re not. 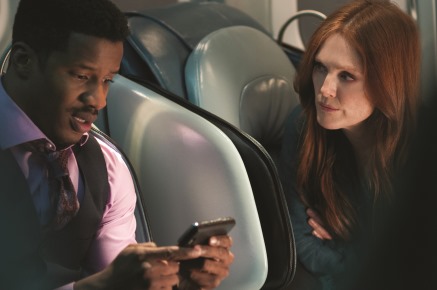 Just to keep things fair, Bill also scrutinizes an old woman, a nerdy schoolteacher (Scoot McNairy) and beautiful young woman (Charlotte Kirk) who irritated him by continually kicking back of his seat while she and her boyfriend had sex in the seats behind him. Eventually, even Jen comes under suspicion as an idea of hers leads to yet another wrong suspect.

Even more inevitably, Bill’s actions convince everyone – flight crew (with the possible exception of Nancy), passengers and his contact on the ground (Linus Roache) that he’s hijacking the plane. It even makes the news – which is broadcast on the plane, making things even worse.

Lupita Nyong’o plays Gwen, another flight attendant, and is pretty much wasted in a throwaway role. Plus, there’s a little girl, some cocaine and a bomb! There seems to have been a kitchen sink approach employed by a handful of writers between story and screenplay.

One of the problems with setting a thriller in an airplane is that there are too many possible victims and too many possible suspects. Another is that there are too few ways for the action to develop with any sense of reality. There are so many implausibilities in Non-Stop that even some superb direction by Jaume Collet-Serra and editing (by Jim May) can’t quite overcome them.

If you’re willing to just take the ride and be swept along, there are thrills to be had in Non-Stop. At least it’s better than Taken 2.