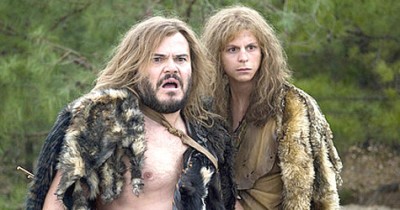 If there was a comedy that has biblical proportions for the 21st Century, Year One would not make the cut even in the 1st Century. If we really wanted to "Meet Our Ancestors" as the movie’s tagline suggested, I highly doubt that the human race would survive and thrive. The movie follows Zed (Jack Black), a villager who is a lazy hunter who spears his fellow man rather than a warthog for food. He tries to win the heart of his dream lover Maya who is outside of his league in more ways than one.

On the end, his friend Oh (Michael Cera), a weak gatherer who does not have the courage or the charm to impress his girl Eema. The two wandered through the forest and gather upon the tree of knowledge. Zed took a bite of an apple which causes the village to evict him. He was going to go at it alone until Oh joined him on his quest – to see the world. What will they find outside the village, only the next 90 minutes would tell. Year One is a Old Testament spoof that does not deliver the goods. The first off, it heavily relies on bawdy toilet humor and not enough story to go around. Year One gave us too many sex jokes that it would put Sodom & Gomorrah to shame.

Beware of Zed tasting possible human poop and Oh giving a high priest (Oliver Pratt) a nasty hairy oil massage which can be creepy to anyone. The film generally relies on Zed’s heroic but bumbling efforts to save the day and Oh’s inferiority complex. We got of Black’s caveman proclaiment of utimate manhood and Cera’s shy, calm, but lovable shtick which made his career charming even when the film is not. Year One feels like we were getting a bad history lesson. Harold Ramis who brought us wonderful comedies like "Ghostbusters" and "Groundhog Day" failed to deliver an outstanding comedy that we can enjoy. All one could ask is WHY on Earth did you direct this recipe for disaster. The plot alone was too much of a good thing. To go from prehistoric times to biblical times seemed very fetched but few movies pull it off.

The only two movies that attempted the similar fate were "Monty Python & The Life of Brian" & "The History of the World: Part I". I highly recommend these films if you want to get the ultimate biblical laugh. There an old saying "Those who do not learn from the past are doomed to repeat it." I would say "Those who don’t learn from Year One are very lucky."

4 thoughts on “MOVIE REVIEW: Year One is a Level 0”