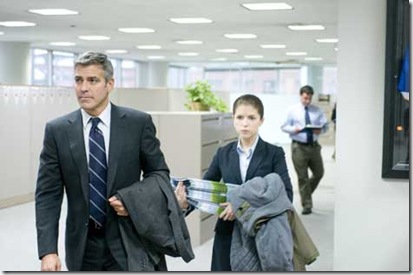 While Up in the Air is about a character who has no real human connections in his life and prefers it that way, his job – corporate executioner; the guy whom corporations hire to terminate employees because they don’t have the guts to do it themselves – is one that should make the character loathsome. Instead Ryan Bingham [George Clooney] is likable, charming and capable of dealing with all the many reactions to which his job exposes him. Part of that charm manifests in the super efficient way he travels – and his goal of becoming only the seventh person in the world to achieve 10,000,000 air miles.

The major conflict of the film comes after Bingham has made a human connection [one he never even sees coming] with a woman named Alex Goran [Vera Farmiga] who, like him spends a lot of time on the road. She may not be in his league, travel-wise, but she seems to be a fun person to hook up with.

Said conflict comes in the person of Natalie Keener [Anna Kendrick], creator of an approach to the job that would take Bingham and his fellow traveling executioners off the road and replace face-to-face work with internet conferences. When Bingham objects and walks her through a couple of scenarios, his boss, [the ubiquitous Jason Bateman] tells him to take her on the road and let her see what he does.

Reitman, who co-wrote the script with Sheldon Turner, has created a film that treats the downsized with a deep reality that offsets the conventions of the romance comedy that seems to be developing between Ryan and Alex, and the mentor/student relationship that develops between Ryan and Natalie.

From the perfectly edited montage of American locations as seen from the air [accompanied by a soulful rendition of This Land is My Land] to the equally perfect montage of clips from interviews with people who have recently been downsized [and who play some of Bingham and Natalie’s victims], Up in the air is beautifully paced, beautifully composed and character driven. The dialogue is smart without feeling written, and the performances are uniformly excellent.

This is a thoughtful and thought-provoking movie that will likely spark more than a few conversations.

Interestingly, though not an ironic film in the way that Reitman’s previous films were, irony does find its way into the film but only insofar as the personal lives of the main characters are concerned – and not to the ramifications of Bingham’s job. It is solely personal and not topical – which leads to our being able to relate to ironic moments in our own lives, but not in regard to any personal experiences we might have had from either side of the desk in being hired or fired.

It’s a delicate balance that Reitman has to maintain and it’s to his credit that he never steps falsely over the course of the film’s one hundred and nine minutes. It’s also a credit to Reitman’s attention to detail that the songs used in the soundtrack are genuinely affecting and not merely stunt casting – something that is especially true of the title song that plays over the closing credits. It was written by the recently downsized Kevin Renick, who wrote it for the film – and it’s played as it was presented to Reitman.

It would not surprise me in the least if Up in the Air cleaned up at the Golden Globes® and the Oscars® – it’s just that good.