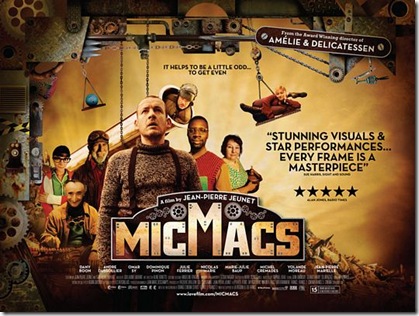 Jean-Pierre Jeunet is best known for the luminous Amelie – and the darkly comic Delicatessen – but they’re not the only fine films he’s made. His latest effort, Micmacs, is both a revenge flick and a caper movie. In this case, both revolve around the unfortunate Bazil [Dany Boone] – whose father is killed by a landmine while on assignment to the Moroccan desert to find and defuse them – and who winds up with a bullet in his brain as the result of a freak accident during a drive-by shooting.

After his father’s death, young Bazil [Noe´ Boon] finds himself in a prison-like boarding school from which he escapes in a time-honored manner from prison break films. He grows into Dany Boone and we rejoin his life as a video clerk who recites dialogue with the videos he watches, many years later. The sounds of screeching brakes and gunshots draw him to the door of the video shop and, when he steps outside for a better look, a falling pistol discharges. The bullet winds up in his brain – and moving it could turn him into a vegetable.

Sadly, while he was in hospital, his boss replaced him with a cute young woman and poor Bazil founds himself homeless – until an odd junk collector takes pity on him and takes him home to a world unlike any we’ve ever seen in film. In a kind of cave under a junkyard, Bazil finds himself adopted into a most unusual surrogate family that includes Slammer [Jean-Pierre Marielle], who’s spent three-quarters of his life in prison; Calculator [Marie-Julie Baup], a prodigy in everything numerical, but not terribly bright in any other respect; Tiny Pete [Michel Cremades], small in stature, but able to make the most amazing things out the bits and pieces/bibs and bobs to be found in the trash; Buster [Dominique Pilon], the 1977 world record holder for distance covered by a human cannonball; Remington [Omar Sy], a black former ethnologist who bases his understanding of the French on their proverbs, leading to some unusual lines; Elastic Girl [Julie Ferrier], kind-hearted and short-tempered with a heart of gold and a tendency to fold herself into the fridge to cool off [literally and figuratively]; and Mama Chow [Yolande Moreau], surrogate mama who has lost her two daughters when they entered a House of Mirrors and never came out. 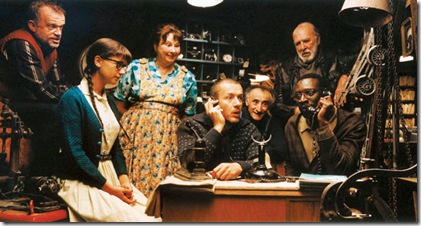 When Bazil inadvertently finds himself on a street where the makers of the mines and bullets that have so affected his life, he decides to take vengeance and enlists the aid of his surrogate family. What’s so unusual isn’t that elements of both revenge and caper movies follow this decision. What makes Micmacs different – besides the eccentricities of the characters – is the subject to be stolen: the credibility of the weapons manufacturers involved!

The film features the use of the family’s oddball devices and the convolutions of a typical caper move and gives them a darkly – and frequently subtle – comic twist [the manner in Elastic Girl helps evade surety to one of the manufacturers’ condos; unorthodox surveillance methods, and yes, a cannon]. The characters of the family are developed as they interact with Bazil and each other; the weapons manufacturers – Nicolas Thibault De Fenouillet] and Francis Marconi [Nicolas Marie] through their behavior at work and, for Marconi, through his interactions with his son.

The film moves at a slightly better than deliberate pace as Jeunet employs the kind of cross cutting found in more generic caper movies to show us all the threads that are in action at any given time [though each action is as off-kilter as the characters and their desired result are from the usual].

Between the eccentric surrogate family, the twisted bad guys and the strange variations on the film’s well-used themes, Micmacs can only work if we buy into Bazil. Dany Boone, with his Chaplinesque physicality and morose, Keatonesque expression, gives a sympathetic performance that ingratiates without seeming to actively ingratiate. When he finds something developing between himself and Elastic Girl, for example, it’s as much a revelation to him as to us – though not her [women always seem to know well ahead of us guys].

There are a few explosions – and a kidnapping or two – but Micmacs is not an action thriller. It is a surreal journey to validation. In attempting to gain revenge for the indignities through which the weapons manufacturers have put him – and through the manner in which he hopes to achieve his revenge – Bazil is looking to regain his lost dignity; take his place in a real family, and make the world a better place.

While the whole film is a giant Rube Goldberg device, the performances, and Jeunet’s attention to details, give it life as something more than a mere construct. If you like your revenge movies to provide a satisfying dollop of intelligence, and a bit of genuine wit, Micmacs will give you what you’re looking for.