Let me just go on the record as saying I loathe David Fincher movies. I absolutely despise Fight Club, and The Social Network.  The Curious Case of Benjamin Button and Zodiac are good but not as good as people make them out to be.  I don’t understand why people love this man’s movies.  To me they always come across as being directed by some little boy who has serious issues with women and has a certain amount of self-loathing for his own manhood.  Now he adds another to this body of work The Girl With The Dragon Tattoo.

This movie is a chore to sit through, the plot is convoluted at best, but what I can’t get over is just how drab, dreary and ugly this movie looks.  It is relentless with soft lighting everywhere, bland, boring, unimaginative camera work and the pacing is painfully slow. I felt almost every minute of the movie’s 2 ½ hour run time. Even saying this, I think it’s the type of film that may work better at home. 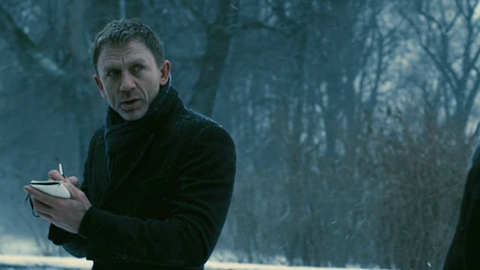 The two things that really hold this mess of a film together is, while the story takes forever to unfold, once it does it is intriguing. But every vile revelation is met or told with all the emotion of a someone having afternoon tea with a friend.  “Oh, my father and brother raped me over and over again, one lump or two?”  I guess this movie is supposed to be about the banality of evil but everything just comes across as exploitation.  There are two, unnecessarily, graphic and disgusting anal rape scenes.  It seems like Fincher just revels in this level of violence.  The rape scene could be justified if it had some sort of material impact on the character, but it didn’t.  All it showed was that she gets revenge a few minutes later but other than one minor moment much later in the film it is never mentioned again.

Other than the rape scene no one in the movie seems to really care what is going on or happening to them.  Everyone in the cast just walks in and out of scenes reveals some major piece of information and there’s no indication that what the just said even matters. “My father was a Nazi?  Eh…What of it?”

Part of the movie’s joke is that when one of Sweden’s richest men, Henrik Vanger (Christopher Plummer) interviews disgraced financial reporter Mikael Blomkvist (Daniel Craig), he says that he wants him to meet and interview the vilest people in the world “his family,” and that they are.

Mikael is hired to investigate the 40 year old mystery of Vanger’s granddaughter’s disappearance. To help him he brings on an assistant – Lisbeth Salander (Rooney Mara) a social misfit with serious issues with authority figures. We later find out, she has good reason for this.  When did Robin Wright get so old?  I’ll always remember her from one of my all time favorites The Princess Bride and the TV soapster Santa Barbara. I still love her but it made me feel ancient watching her – especially since this performance is probably her worse, there was no life or spark at all.

As I said earlier, this movie is watchable because the story does get interesting, but also Rooney Mara is both interesting and detached from everything going on around her, but she has a weird quality that somehow held my interest.  There’s an anger underneath her that I kept waiting to see explode out.  There’s one moment when it happens, but I was expecting more of it later in the film and it never really comes.  Rooney plays Lisbeth close to the chest and we never really get below the surface of the detached exterior.  I’m assuming we’ll find out more about her in the next few movies and I’ll admit I do want to see what happens with her.

Craig is serviceable but there’s nothing particularly interesting about his character or performance. I would have liked to see more emotion from him like some righteous indignation at the things he finds or outrage at his career being ruined in the beginning. We get none of that, instead it’s “Oh, well, my career is ruined, let’s have a bree!”

The movie’s last act felt like it was tacked on, after a natural ending point the movie goes on for another 15 or 20 minutes for no real reason – to give us resolution on a plot point that didn’t need one. Even though I really didn’t like this movie and this film did feel like a complete story, I do find myself interested in reading Stieg Larsson ‘s novels to see what happens next.

Finally watched part 2 and 3 of the Swedish version and I will admit the Rape Scene is very important for the next two movies – however, my central point that it did not need to be that graphic still holds. I also review a movie based on what is shown not what’s in the future or in the books. A movie has to stand on it’s own and this one fails to do so.

39 thoughts on “Michelle Hates The Girl With the Dragon Tattoo!”