Greg (Thomas Mann) is entering his senior year at high school. He gets good enough grades to get into a respectable college and has mastered the languages of the many tribes that exist in his high school – guaranteeing that he walks unmolested, almost invisible, through its halls.

He refers to Earl (RJ Cycler), his only friend, as his co-worker because he hesitates to use the word friend – it comes with a certain type of baggage. Greg and Earl have been friends since kindergarten and they make spoofs of the movies that Greg’s dad (Nick Offerman) has shown them over the years – they’ve made forty-two, so far (like A Sockwork Orange, or Senior Citizen Cane).

One day, Greg’s mom (Connie Britton) tells Greg that a girl he knows is dying of leukemia – and insists he go visit her. After much argument, he does. And so, he meets Rachel (Olivia Cooke) – but not before being nearly hugged to death by her alcoholic mom (Molly Shannon). When asked why he’s visiting, he tells the truth – and Rachel is as aghast at the idea as he was.

Gradually, the three of them become friends, but – unlike other ‘cancer movies’ – Greg and Rachel do not fall in love. In fact, if Greg’s mom hadn’t insisted on his visiting her, they would never even have become friends – though once they’ve met, it seems inevitable because he makes her laugh and she seems likely to not have been doing much of that.

As a result of becoming friends with Rachel, however, Greg loses his invisibility and even gains an arch-nemesis. On the other hand, one of Rachel’s friends, Madison (Katherine C. Hughes), persuades him to make a movie for her. And speaking of Madison, the class ‘hot girl’ – a very clever animation shows Greg’s view that a hot girl’s actions, even inadvertent ones, wound like a moose stepping on a squirrel, or some other small woodland creature, without even noticing.

The best thing about Me and Earl and the Dying Girl (aside from the central friendships) is that every adult we see, we see through the kids’ eyes – so Greg’s dad, a tenured professor, seems to do not but watch movies, in his bathrobe, with his son; Rachel’s mom, Denise, seems to always be drinking; their favorite teacher (Jon Bernthal), eats exotic foods (like Vietnamese pho) and lets them eat lunch in his office (because, of course, the cafeteria is a war zone what with all those tribes/cliques attempting to claim territory). As a result, we get a real feel for their world and how it works.

Another clever touch is the unique chapter headings that preface sections of the story – the final one being, ‘The part that comes after all the other parts,’ and time passage notations like Day 53 of Doomed Friendship.’ When we see ‘She survives… don’t freak out’ printed across the bottom of the screen, we wonder if he’s kidding himself, or just trying to spare us his pain.

Me and Earl and the Dying Girl pulled off the rare double win of both the audience prize and the jury prize at Sundance and it’s easy to see why. This is a well-written, beautifully directed film that fills a real world with people – not merely characters – who each have distinct points of view and approach life and/or death with very different perspectives. 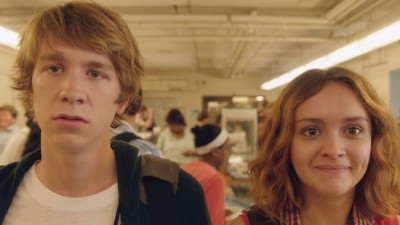 The core cast is superb – especially the three title characters. Mann gets to underplay Greg in a way that makes his low self-esteem and oddball humor feel natural; Cycler gives Earl the showier performance – Earl kinda wears his heart on his sleeve, and Cooke makes Rachel grounded – yet able to appreciate Greg’s quitter weirdness and Earl’s more obvious emotionality.

Based on the novel of the same name, Me and Earl and the Dying Girl was adapted by the novelist, Jesse Andrews, with an easy, subtle grace. This is one of the few films where narration works well – partly because the writing is so sharp and partly because Mann knows and understands his character so completely.

Director Alfonso Gomez-Rejon (Glee, American Horror Story) lets the script breathe. There are no real action beats – even when Greg gets into his first fight ever, it’s a school kids’ fight: awkward and not particularly action packed. And when moments arise where, in other films, the boy and girl would fall into each other’s arms, here they do not – Gomez-Rejon  lets the imaginary version begin before Greg even makes a point of letting us know that this is not that kind of story – and the two shift back to their previous positions without much ado at all.

In an odd way, because there are a lot of moving parts here – and, for one example, Rachel’s room wouldn’t look out of place in a Wes Anderson film – the most surprising thing about the film is how unfussy and (at least emotionally) uncluttered it is.

There have been a surprising number of really entertaining movies so far this year, but none pack the punch of Me and Earl and the Dying Girl. It is easily the best film I’ve seen in the first half of the year.