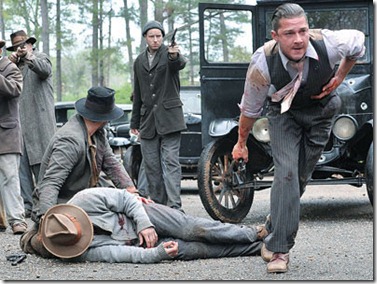 Lawless – John Hillcoat’s latest collaboration with Nick Cave – wants desperately to achieve a Bonnie and Clyde vibe but lacks the panache. Instead, we get a kind of ‘30s Drive with stretches of character punctuated with sudden, explosive violence.

Working from a script by Cave (The Proposition) – based on Matt Bondurant’s The Wettest County in The World – Hillcoat gives us the beautifully filmed story of the Bondurant brothers and how they stood up to crooked lawmen to produce and distribute the best moonshine in Virginia.

The brothers – laconic but philosophical Forrest (Tom Hardy), alcohol-driven force of nature Howard (Jason Clarke) and ambitious but slight Jack (Shia LaBeouf) – are happily running the best moonshine in the county, courtesy of young distilling genius Cricket Pate (Dane DeHaan, Chronicle), from a service station/café when Special Deputy Charlie Rakes (Guy Pearce) arrives on the scene and serves notice to every bootlegger in the county that things are going through him now.

The Bondurants refuse to go along. Mayhem – in controlled bursts – follows.

That’s Lawless in a nutshell – but Cave and Hillcoat fill out that plot with interesting characters (Rakes, for example, is a complete dandy who has no problem with violence – though he seems a bit of a germaphobe), some amazing scenery and a lot of unexpected detail.

There’s a legend that the Bondurants are invincible – Howard was the only survivor in his platoon after they were all wiped up in a single battle during the first world war; Forrest contracted a deadly flu during an epidemic and the was only person in the county to recover once infected.

A beautiful redhead named Maggie (Jessica Chastain) arrives from Chicago, seeking a quieter life. Thanks to Rakes and his two henchmen, that’s not quite what happens.

Jack falls for Bertha (Mia Wasikowska, Alice, Jane Eyre), the beautiful daughter of a stern preacher and tries to court her after he’s made some serious money – she finds his efforts more endearing than his finery. The money comes from a near fatal encounter with legendary gangster Floyd Banner (Gary Oldman in a terrific cameo) – another fine bit of detail. 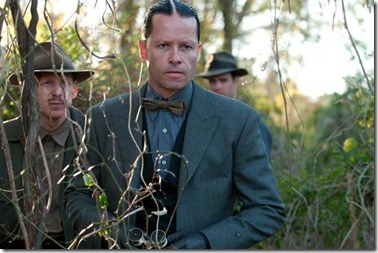 Forrest, in the most improbable moment in the film, survives an attack that all common sense says he should not have, though the result plays into the Bondurant legend with both dramatic and comic aftereffects.

In these subplots, the characters become more complex and more relatable. While the Bondurants might use violence, it’s never precipitated them and their use of it and, if not necessarily condonable, is certainly understandable. The Forrest/Maggie and Jack/Bertha relationships also add depth to the mix.

Lawless is narrated by Jack, so if you’re not partial to LaBeouf, then you might not enjoy it as much as I did – though there are some pretty terrific performances from the rest of the cast, especially Chastain, Clark, Hardy and Pearce. And Wasikowska continues to impress.

The film ends with a tag that moves a bit sluggishly and is a bit long, but while it might seem like a Hollywood ending, coming from Cave and Hillcoat – neither of whom is known for sugar coating a project – it feels right.

In a film where the soundtrack makes use of period music and Cave’s original score feels a natural part of it, the best way to describe the film’s pace is probably to liken it to a mid-tempo bluegrass song – not too fast, but a good bit more than deliberate – with a few blazing solos (the bursts of extreme violence).

The opening credits state that Lawless is ‘based on a true story’ but that’s most likely because it would be awkward to say that it’s ‘based on a fictionalization of a true story.’ While I have to wonder what parts of Lawless are fiction (undoubtedly some characters have been consolidated, but it wouldn’t surprise if some of the story’s more unlikely details turned out to be the true ones – life’s funny that way), in an odd way, that adds to the fun of the film.

Lawless may not be the next Bonnie and Clyde, but it’ll do until it comes along.

One thought on “Lawless: Not Quite The Film It Wants To Be But Still Very Good!”