Never Go Back opens with Reacher taking care of some crooked cops – with the help of the woman who now commands his former MP unit. It’s a sequence that is, in large part in the trailer, and which immediately settles us in with the no-nonsense Reacher. He’s smart, tough and very confident in his abilities.

A couple of calls to Major Susan Turner (Cobie Smulders) – the aforementioned commander of his former unit – and Reacher finds himself in DC and looking her up. Unfortunately, she’s been relieved of her command and imprisoned for murder and quite possibly treason.

Her replacement, Col. Morgan (Holt McCallany, Lights Out, Sully), seems to take great pleasure in informing Reacher. Turner’s aide, Sgt. Leach (Madalyn Horcher, Gracepoint), he learns, was ordered not to tell him and a hypothetical later, he knows who must be her J.A.G. lawyer – and a meeting leads to the lawyer’s death and Reacher being hustled to the same prison (following his not very friendly notice to a couple of guys following him that he doesn’t like being followed).

We also learn that a woman named Candy has filed a paternity suit naming Reacher as the father of her daughter, Samantha (Danika Yarosh (Heroes Reborn).

As he’s being processed, he sees the same two guys being taken to Turner’s cell – allegedly to transfer her (though no one says to where, exactly). So he breaks her out of there at the expense of one her men, Capt. Espin (Aldis Hodge, Underground, Leverage).

As they try to figure out what’s going on, we learn that an assassin (Patrick Heusinger, Girlfriend’s Guide to Divorce) has been assigned to find them and kill them. He has also been informed of Reacher’s alleged daughter. And of course Reacher wouldn’t risk her life – even though he knows she’s not his daughter. 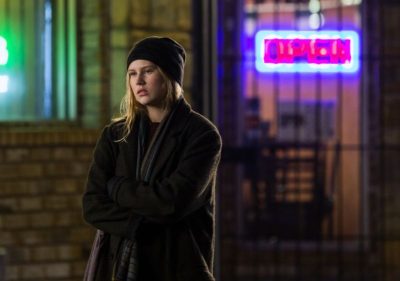 What follows is pretty much a typical action movie that works partly because it not only accepts the absurdity of Reacher’s physical feats (performed in the books by a 6’5”, 250 lb. behemoth) being performed by a 5’6”, 140 lb Cruise, it doubles down on them in terms of intensity (and Cruise can be intense).

Other factors that tweak the formula include the way that Sam seems to have a number of traits that line up with Reacher – she’s smart, observant, doesn’t like to be followed – and the way the story gives Turner as much badassery as Reacher (he even lets her drive because she’s better at it than he is).

Yet another tweak is that the villain (Robert Knepper, naturally) isn’t nearly as interesting as The Hunter (as the credits call the assassin). He’s good at his job – maybe even as good as Reacher – but perhaps allowing his need to be the best cloud his judgement.

Jack Reacher: Never Go Back is pretty faithful to the novel, too. Co-writers Zwick & Marshall Hershkovitz and Richard Wenk don’t actually have to pump up much to give action fans all they want. They do have to pare down a sizable novel to a hair under two hours – and do so smartly and economically.

The action sequences are muscular and frenetic; the chemistry between the leads is great and there are more than a few great lines (and when ‘Yes.’ Is a great line, you’re doing something right). The humor arises naturally out of the situations and the drama is as intense as anyone could ask for.

Plus, Reacher’s creator gets an even better cameo as a TSA agent – he even gets a line!

Never Go Back is an improvement on the fun Jack Reacher in almost every way (and we gave Jack Reacher a solid B).