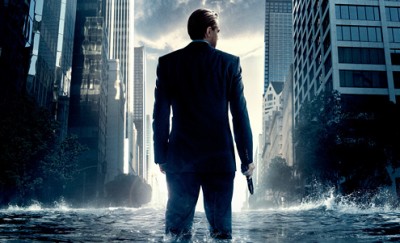 Inception gave me a strange sense of déjà vu, I felt like I saw this movie earlier in the year and didn’t like it when it was called Shutter Island. I’m not saying there’s a lot of similarity between the two movies other than its themes of dream vs. reality and it’s lead star Leonardo DiCaprio but like Shutter Island it’s a movie that thinks it’s smarter than the audience and uses an obnoxious soundtrack to signal that something important is happening only at the end of it you realize you just wasted 2 1/2 hours of your life.

Director Christopher Nolan likes odd material, he made his bones on the mind numbing, Memento before going mainstream with the last two Batman movies. Inception in many ways is like a Hollywood version of Memento. Almost like if Nolan had the money in the early days this is the film he would have made first.   I used to have a lot of nightmares when I was in High School and read a lot of books on the subject of dreams and how to master them and do feel like I can control my dreams – probably also explains why I’m partially an insomniac so I actually believe everything they do in the movie is possible and understand the concepts the movie talks about. Whenever I feel a nightmare coming on, I use the same techniques to force myself awake. So I’m not going to say I didn’t like this movie because it was confusing but from the first few minutes into it, it completely fails to suck me in. I wanted to like this movie, I want to see a great summer movie but there’s something about the material. First it’s hard to connect with a movie when it tries so hard to “fool” you or to keep you guessing; is this a dream, is it not, is it a dream within a dream? Who cares? Just commit to something and get on with it.

The movie opens almost like Shutter Island with DiCaprio’s character washed up on the shore of an Island that seems out of time, to the sound of an over bearing soundtrack. A lot of stuff happens in the first few minutes of the film but none of it seemed important and that’s the problem, during most of the main dream sequences there are usually three things happening at once so as an audience member I was never clear which was the dream and which was real and it made me not care about anything. Especially for the first 20 or 30 minutes, there’s not much of a story at all, just Leonardo’s character trying to track some guy down.

We slowly find out that Cobb (Leonardo DiCaprio) is some sort of thief whose expertise is stealing secrets from people’s dreams. In 2 1/2 hours the movie never really explains how this came to be. But it takes great pains in explaining the theory behind it and how it all works – over and over and over. By the third explanation, I was like, I get it – you can share dreams with people, you need an Architect/ Ariadne (Ellen Page) to build the world so your brain won’t see the cracks in the dream, something happened to your wife and now she keeps showing up in your dreams/missions, can we move along already.

I never got the Leonardo thing, I find him to be kind of pretentious, but he always picks challenging and intriguing movies that work despite him. There’s a fine line between challenging and ponderous and if you are going to be ponderous at least be interesting. I actually love Ellen Page and would like to see her in more movies, but she’s wasted here. Her quirky, smart personality is lost in the seriousness and shallowness of this part.

When Cobb gets an opportunity to return home to his long lost kids, the movie spends a lot of time with him building his team for their next assignment, but while Cobb’s motivations are clearly explained and to a lesser extent Ariadne we don’t find out why any of the people on Cobb’s team is there. We know they have specific roles to play but the why is never clear, I suppose I can assume it’s just about the money involved.

Nolan does show a lot of visual flair in this movie, the opening shots of the Ocean crashing against the island, there’s a sequence when Page tests the limits of the dream world and the closing third of the movie which included a neat hotel chase sequence that are all visually interesting (I wouldn’t say stunning, but at least they were unique) but there’s no reason given to actually care. The last 30 minutes was a complete mess, featuring three or four dreams all happening at once. I did think Call of Duty: Modern Warfare would make a pretty cool movie since one of the dreams was a blatant rip off of the game. I kept thinking, man I wish I was home playing some Spec Ops and not stuck here watching this movie.

The movie felt like it was never going to end. I really wanted to walk out of this movie, but I knew there was going to be some sort of twist that movies like this generally have so I stuck it out and the inevitable twist wasn’t much of a twist at all. The movie just kind of ends and left me going, huh? Inception is all noise signifying nothing.

40 thoughts on “Inception, Michelle’s not Impressed”