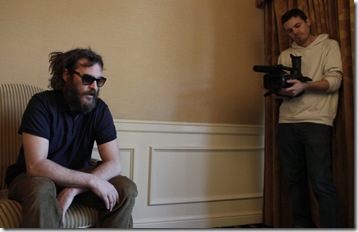 I was looking forward to the advance screening of I’m Still Here – allegedly a documentary about Joaquin Phoenix’s efforts to become a rapper – because of the ambiguity. No one seemed to be sure whether it was a real doc, or performance art. Once Affleck spilled the beans on The Late Show with David Letterman, that ambiguity was gone – and the actual film doesn’t hold up without it.

I’m Still Here follows JP for a bit over a year and shows him, paunchy and seemingly falling apart, as he tries to connect with Sean Combs in an effort to get him to produce his first album. Along the way, we get to see Phoenix become more and more unravelled as Combs seems to be avoiding him.

There are scenes where he mutters incoherently [subtitles have been provided for some of those moments – but confusingly, also for some moments when Phoenix is perfectly clear; scenes where he appears to crap on a sleeping associate he’s accused of betraying him; a sequence with hookers – in business mode; even a sequence where Phoenix heaves the contents of his stomach into a toilet that goes on for an agonizing period, after a gig goes horribly wrong. Which means, yes, we get to see and unfortunately] hear him rap.

If Affleck hadn’t said anything, I’m Still Here could have been a meaningful film about the disintegration of a world class talent on a misguided quest. Instead, outside of a very few clips [the Letterman interview and a few other brief scenes of televised news pieces], it’s a depressing, humorless exercise in combining filmmaking and practical jokes.

I can think of few films that could be less worth anyone’s time [well, Grown Ups, but that wasn’t pretending to be anything but light entertainment]. Calling it mean-spirited drivel would be an insult to mean spirited drivel. The only thing that keeps I’m Still Here from getting an F is… Nope. I got nothin’…