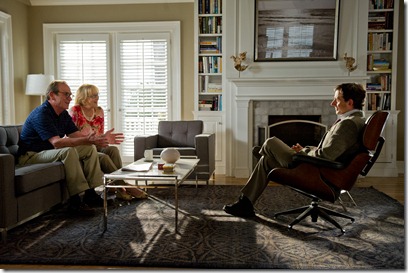 Hope Springs isn’t the most original movie around. Indeed, its tale of an old married couple who have gone from passionate to barely roommates contains few surprises, plot-wise. What makes it work is the terrific chemistry between stars Tommy Lee Jones and Meryl Streep and the way they add unexpected nuances in the oddest places.

Kay (Streep) and Arnold (Jones) have been married for thirty-one years and, since he threw his back out several years, have separate bedrooms. Every day, she cooks him the same breakfast – which he eats while reading the sports section of the morning paper – and every night, she wakes him up from his nightly dose of ESPN Golf so he can go to bed. It’s been years since he gave her an anniversary present that wasn’t something for the house.

Now Kay has decided that she wants her marriage back. She comes across a book called You Can Have The Marriage You Want, by Dr. Bernie Feld (Steve Carell) and, after doing a bit of online research, discovers he counsels couples who, like Kay and Arnold, have lost the magic in their marriages. She promptly signs up for a week-long intensive course – to Arnold’s extreme dismay.

When we meet them, Kay is a quiet woman – still attractive, but worn to near invisibility by the sheer routine of their marriage. Arnold is taciturn and grouchily clueless. As the film progresses, she becomes more determined and, as a result, more interesting. Arnold complains throughout – totally unaware that he is walking a path toward a solitary future.

Dr. Feld is a sharp, intuitive and occasionally wise therapist. He knows when to nudge, when to prod and when to back off a bit. He also knows when to call a spade a shovel. In their sessions, his guidance allows both Kay and Arnold to reacquaint themselves not only with each other, but themselves. Carell allows him to occasionally let his concern for his patients show – mostly behind his eyes, but right up front when absolutely necessary.

Part of the fun of Hope Springs is watching two immense talents at play. Streep (always at her best in comedies or dramedies) and Jones (whose best comedic work has been as the straight men to Will Smith in the Men In Black franchise) take different routes to express their loneliness and frustration, but each is utterly convincing – and their chemistry is amazing.

The script, by Vanessa Taylor, tracks in a fairly predictable manner, but keeps the audience involved by mixing a range of humorous moments (some simply from the difference in the leads’ characters; some a bit more risqué and arising from each one’s growing desperation and confusion. She gives her characters a solid base and, from that base, room to play.

David Frankel’s direction is, at times, a bit on the nose, but he shows an understanding of the characters that allows them to progress at their differing paces without making the film seem in any way disjointed.

Sure, a movie about sixty-somethings trying to reignite the magic of their marriage might not be the most likely of summer movies, but it has a lot of heart and it would be a shame if it got lost amidst the action and explosions of blockbuster season.