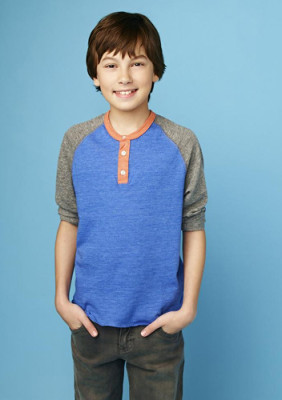 Hayden Byerly, who plays Jude from ABC Family’s hit series The Fosters, recently sat down with us to open up about his time on the show so far, Judes newly found independence and where the possible budding romance his character is exploring could be heading.

The Fosters airs Mondays at 8/7c on ABC Family.

Full interview after the jump.

Hayden: In an upcoming episode, Callie drops the bomb and tells Jude exactly what she wants and what she thinks is going to happen, just to inform him and let him know of the possibilities. I definitely think that Jude has a reaction that I don’t think many people were expecting, but he understands. He gets it. He wants to be able to see his sister, but he also wants her to be happy. So, it’s very cool to see them have that special moment. 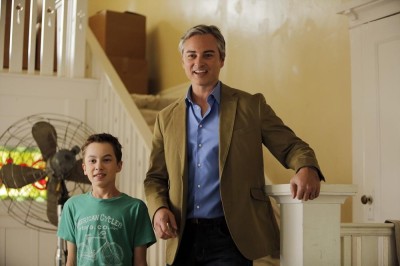 What’s going to happen with Connor and Jude?

What’s it like to being on set of The Fosters?

Hayden: It’s awesome. It’s very cool. Everyone on set, the cast and crew, everyone is super kind. You start to know everyone. You start to learn everyone’s names and you become very closely connected with them, and you can really look at them as a family member almost. It’s basically just walking around like a family reunion, except you know everyone. I love working on set. It sometimes saddens me when I’m not waking up at six in the morning getting ready to go there.

How do you get into character?

Hayden: Usually it’s a lot of help from the amazing dialect coach that we have, his name’s Michael Traynor. He helps me on a lot of personal and very professional levels. He really helps me adapt to some of the really hard situations that Jude’s put in, and he really makes me have that mindset of where Jude would be and helps push me into Jude.

What do you find most rewarding about playing Jude?

Hayden: I think that the impact that he has on so many different people, being able to portray a character that has so many issues and problems and has gone through so many tough times that so many kids in the real world have experienced, I think that it’s most rewarding to hear these kids say they were able to come out and tell their family they were gay because of Jude’s character, and because of seeing the show. That’s a reward that no one else can match.

If you could pick somebody past or present to work with, who would you pick and why?

Hayden: Leonardo DiCaprio. He’s one of my favorite actors. I’ve always been a huge fan. I love the work he’s done and I think that he’s such a great actor. I love so many movies that he’s in and the characters that he can play, and how he can go in one direction or another. He can play so many different people at one time. He’s a very incredible actor, and I would want to work with him if I could.

What do you like to do in your spare time when you’re not acting?

Hayden: I am a big fan of skateboarding, running around. I live on the beach, so it’s a great place to do so. It’s always sunny and nice out. I’m a pretty big video game player as well, and I definitely like to read, so I would say those are my top three things I like to do.

Where do you see Jude’s character and his life progressing in five to ten years from now?

How did you first heard about the audition for The Fosters?

Hayden: I heard about it just like any regular audition. I just went in like a normal audition — going to it and reading the different lines, it was one of my first times I actually went behind and sat on one side of the conference table and had maybe 12 people on the other. It was nerve wracking, but apparently I did really well because I got the role [laughs]

What do you think of Jude’s newly found independent streak? Do you think it could cause Callie to feel like she’s not really needed so much anymore?

Hayden: Jude and his independence and him becoming a little older is something that Callie is seeing, and I think that is helping her make her decision live with the Quinns. She thinks that Jude will be fine on his own and she’s not leaving him permanently, they’ll still see each other, but that he doesn’t need her always in the house. Jude’s independence has a little impact on her decision, but he is getting much older, so that’s something very cool. 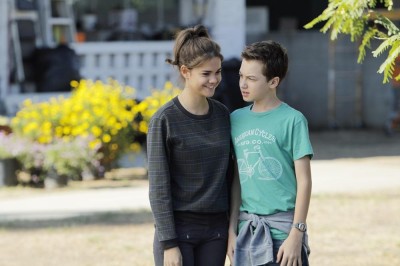 Do you think the show is going to explore the foster care system a little more going forward?

Hayden: I certainly hope so. There’s a lot of stuff, back stories that Jude has experienced, and I’m sure he does have his own demons and I definitely want to be able to see that. I would hope that maybe even in Season 3 we get to take a look at that.

Does your relationship with Maia [Mitchell] transfer into real life?

Hayden: It does, yes. Maia and I are like real brothers and sisters. We hang out with each other all the time, and we play around. We’re like a real brother and sister on and off camera. It’s pretty funny. It’s interesting how that energy transfers off. It travels with everyone. I definitely look at Sherri [Saum] and Teri [Polo] as my moms, and Jake. [T. Austin] and David [Lambert] as my brothers, and even Cierra [Ramirez] as a sister. So, it’s interesting how the whole cast does feel like my second family.

Where do you see the Callie-Robert plot line going? Do you think it would be the best decision for you guys to move in with your birth father?

Hayden: Me personally, this is coming from me, I am a fan of her being with the Fosters. I definitely believe that families should stay together. I don’t think they should be torn apart and have Callie go live with one family and then Jude live with the other. I don’t think that that’s the right thing to do. I personally think Callie should stay with the Fosters, but seeing the current situation it is kind of difficult to stay with them.

I wanted to ask you if you could act on any other ABC Family TV show, which one would you love to be a part of?

Hayden: One of the new TV shows that’s come to ABC Family that I’m a big fan of, is Chasing Life. I’ve been checking that out a lot since it airs at 9/8c right after The Fosters. I like that show a lot, and I think that if I was to play on any other ABC Family show that would be one I would choose, because it’s a very good show and it looks like they have a very good cast.

What’s it like to be a part of the LGBT community on such a high scale?

Hayden: It’s really important. It makes me feel very special and very needed. I definitely think that being a character who has these experiences and then talking to people with these same experiences, in real life, is very cool. It’s very interesting to hear their stories. I like hearing the resolutions, because usually they end in “Now I’m happy,” or “And I’ve finally done this,” or “Suddenly done that.” I hear those a lot and it’s cool to be able to be part of such a community that goes through these struggles and to try and help them in any way you can.

Do you think Connor was right in breaking up his friendship with Jude?

Hayden: I don’t think Connor was in the right to break up Jude and Connor’s friendship, because Jude did tell the truth. As we know, sometimes in friendships you’ve got to tell the truth and you’ve got to tell what happens, and you have to tell stories that you might not want to share but sometimes you have to. I don’t think Connor should have reacted the way he did, but I definitely can see why he was angry and upset at the time.

How would you say you and Jude are alike?

Hayden: I don’t want to sound narcissistic [laughs], but I think Jude and I are both very kind people who hold on to those in our lives. We both care very much about our family members, and we’d do a lot of things, almost anything for anyone in our family. Jude and I are very observant and know what’s going on at all times.