Zach (Dylan Minnette) and his mom, Mary (Amy Ryan) have just moved to Madison, Delaware from New York. Before they can even unload all the boxes in their U-Haul, Dylan has met the girl next door, Hannah (Odeya Rush) and been yelled at by her father (Jack Black).

The first at his new school he makes a friend, the unfortunately named Champion (Ryan Lee),  ‘Champ’ for short, and seems to be settling in just in time for the first big dance of the school year – though he asks his mom to give him a sixty-second head start when they first arrive at school, where she is the new vice-principal. 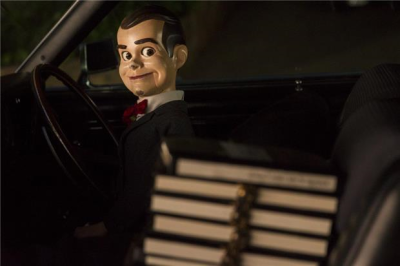 A series of unlikely events – this is Goosebumps, after all – lead to Zach and Champ learning that Hannah’s dad is R.L. Stine (possibly because of the library of locked manuscripts whose titles are all too familiar to Champ. Unfortunately, Zach opens one of the books and voila! The Abominable Snowman!

In the ensuing havoc, all of the books are opened – freeing all the monsters, but especially a talking ventriloquist’s dummy, Slappy, Stine’s evil counterpart (also voiced by Black).

Before you know it, there are monsters everywhere – vampire dogs, werewolves, aliens with freeze rays, a pulsating pink blob…! Even worse, Slappy has burned all the manuscripts so there’s nowhere to imprison the monsters!

Director Rob Letterman turns Darren Lemke’s script in an adrenaline-fueled funny car ride. Visual gags, jokes, bad puns and screams come fast and furious as the inhabitants of Madison find themselves in the center of a monster tornado composed of real monsters.

Zach comes up the idea to have Stine (very quickly) write a story in which all the monsters are trapped, but there’s a hitch. (Isn’t there always?) Stine has to write the story on a particular typewriter – and to get it, they will have to go to the high school, some distance away. 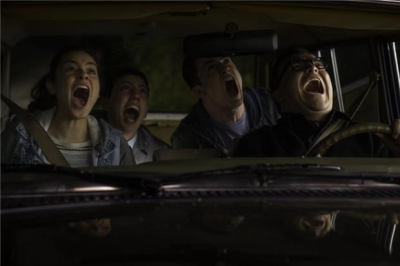 Black gives an inspired performance as the angry, secretive and paranoid Stine of the film, who slowly becomes less mean as he and the trio of kids try to save the town. His shrewdly calculated over the top (but not out of control) work allows Minnette to be the film’s grounding as well as its potential hero – and Minnette is perfect as the new guy who has to step up.

Lee makes an ideal scaredy-cat sidekick who has to find his inner hero at a key moment (changing a pretty girl’s insulting nickname for him from ‘Chump’ to champ).

Rush is also terrific as the girl next door who quickly becomes something more to Zach – and she’s also smart and perceptive in other ways.

Goosebumps is riotous fun pretty much from start to finish. The emphasis is more on the comedy than the horror, and on that level it definitely kicks it up a notch. The phrase ‘inspired silliness’ is a more than adequate description. If that’s what you’re looking for, goosebumps is what you want to see this weekend.