Even with #OscarsSoWhite and a cast of Egyptians played by Caucasians, Gods of Egypt could have gotten by if it was a good movie – and with the director of The Crow and Dark City and a cast that includes Geoffrey Rush, Bryan Brown, Rufus Sewell, Elodie Yung, Chadwick Boseman, Gerard Butler and Nikolaj Coster-Waldau, there was certainly some cause for hope – but, unfortunately, the best thing I can say for the movie is that it’s loud and enthusiastic.

In a nutshell, the story is about how Horus (Coster-Waldau), Lord of the Air, journeys from smug, satisfied heir to the throne of Osiris (Bryan Brown) is forced to go on a journey to learn what really matters in life (and the afterlife). So, it’s Thor only with Egyptian gods instead of Norse.

Horus is set on his journey when Set, Osiris’ brother arrives late to Horus’ coronation, slays Osiris and not only beats on Horus, but rips out his eyes (which turn into giant blue gems) – before turning Egypt into a non-benevolent dictatorship.

Running parallel to Horus’ story is the love story between two young Egyptians named Bek (Thwaites (Oculus) and Zaya (Courtney Eaton). When she dies at the hand of Set’s master architect (Sewell), Bek steals Horus’ eye and seeks out in his exile with a proposition: if he helps Bek bring Zaya back from the dead, he’ll return Horus’ eye. As a fringe benefit, Horus will be able to seek vengeance for Osiris and himself.

There’s also a woman whom Horus loves – Hathor (Yung), the goddess of love – and who has seemingly betrayed him by becoming Set’s queen. Complications ensue.

Then there’s Ra (Rush), god of the sun, father of both Osiris and Set, and defender of the Earth from Apophis (a kind of cosmic worm – thing Ouroboros only bigger).

The script for Gods of Egypt (by Matt Sazama and Burk Sharpless) suffers from a number of flaws – it uses Egyptian mythology but barely uses it beyond the superficial; things happen solely because the plot requires them; even if they don’t make sense in the context of what has gone before; the characters – with the exception of Horus – don’t really have any arcs. I could go on but why bother? 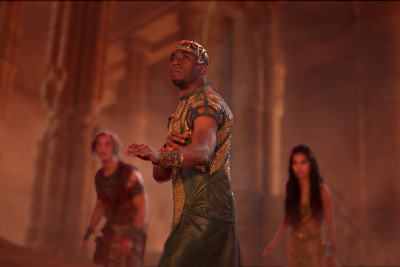 Some of the performances are problematic, too. Rush’s Ra comes off like Clint (‘Get off my lawn!’) Eastwood in Grand Torino; Butler’s Set has all the nuances available to levels of anger; Thwaites’ Bek is wily and stupidly courageous, and Eaton’s Zaya is the personification of faith (in Bek, in Horus). Boseman’s Thoth is one note, but it’s a really good note – he’s so full of himself, he’s created an infinite number of copies of himself to seek out all the knowledge in the world – and Boseman plays him with delightful zest.

Coster-Waldau’s Horus gets a journey, but it’s one we’ve seen before – still, it’s better than anyone else’s and he’s not entirely without charm.

Even the CGI (the film’s budget was on the order of $140 million), as beautiful as they are, are lifeless – and they are everywhere (we really miss you, Ray Harryhausen).

My big drink was gone twenty minutes before the credits rolled – but for Boseman’s performance and the fact that Gods of Egypt kept my mind off weightier matters for two hours, it manages not to be a total failure.