The set-up is basically this: Deckard Shaw (Jason Statham) wants revenge on Dom (Vin Diesel) and Brian’s (Paul Walker) family for what they did to his baby brother in Fast 6. That he feels the need to put his brother out of his misery (see also: exploding hospital) only furthers his rage.

Following Shaw’s leaving the hospital, we see the other side of the phone call he made after killing Han (Sung Kang) in the tag to Fast 6 as Dom answers a phone call just seconds before his home is blown to bits. Shaw is playing for keeps. 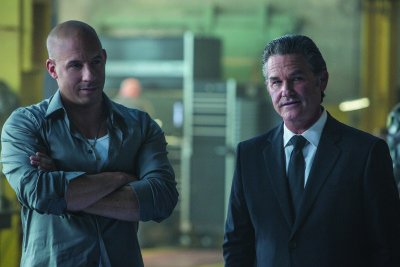 A meeting of Dom’s family (real and surrogate) is crashed by a government ghost, who appropriately calls himself Mr. Nobody (Kurt Russell) and has an offer for Dom. Retrieve the ultimate tracking device – God’s Eye) – and its creator and get the use of the device to turn Shaw from hunter top hunted.

With those few details, you pretty much have all the plot you need to hang a little over two-and-a-quarter hours of action, suspense and genuine emotion necessary to provide an evening’s worth of satisfying entertainment. James Wan (SAW) makes a superb debut as an action director.

Sure, there are pretty girls in teensy bikinis (almost balanced out by the beefcake on display in the form of the movie’s male stars), hot cars, and the aforementioned laws-of-physics-defying action, but that’s not what’s most satisfying here (though they do contribute immensely).

What’s most satisfying is that the entire film is a tribute to Paul Walker – giving Brian one last terrific series of accomplishments (two fights with Tony Jaa! A happy marriage to Dom’s sister – with a son and a baby on the way; several cool moments behind the wheel, and more). And then, the final montage of memories from the entire series that fades to white (not black) before to words appear onscreen – For Paul. Paul – and Brian – get the send-off they deserve. I saw strong men weep during those final moments (heck! I was one of them!).

As for the rest of it, Furious 7 carries on with its diverse cast (I can’t believe no one has brought that up!) and its respect for women (who’s tougher and smarter than the female characters in this franchise? Damn near no one!). One of the best fights in the movie is between Letty (Michelle Rodriguez) and the lead bodyguard of an Arabian prince (Ronda Rousey) – and franchise veteran Elsa Pataky, as Elena, gives Deckard a bit of a rough go, too.

Then you have the banter between roman (Tyrese Gibson) and Tej (Chris Bridges) and the introduction of a hacker, Ramsey (Nathalie Emmanuel, Game of Thrones) who could trade lessons with Tej. Plus, there’s Hobbs (Dwayne Johnson), who exhibits an almost Wolverine-like healing ability and Mia (Jordana Brewster) who gives Brian more than enough motivation to get home safely. Also, not surprisingly, Statham makes a great villain!

And if that’s not enough, there’s always the Lykan Hypersport (you will believe a car can kinda fly…).

Seriously, Furious 7 has terrific potential as a date movie – its heart has always been what differentiated it from most action franchises. It’s that heart that makes Furious 7 far and away the best movie in the series.

If you’re a fan of action movies, it would be a crime for you to miss this one.

Photo of Dom and Mr. Nobody by Scott Garfield/Photos courtesy of Universal Pictures