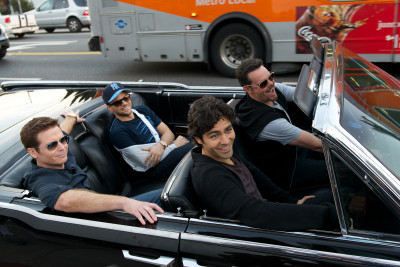 The plot: Vinnie’s (Adrian Grenier) former manager, Ari Gold (Jeremy Piven) is now a studio head and has just the movie for Vinnie – but Vinnie wants to direct. The film, Hyde, goes over budget but Vinnie won’t show it to Ari or his co-financiers until it’s perfect. The co-financier won’t put up another penny until his son sees it and makes recommendations. The son is a dick. Chaos ensues.

Since last we saw Vinnie and the gang, E (Kevin Connolly) and Sloan (Emmanuelle Chriqui) have broken up (even though she’s about to have his baby); Turtle (Jerry Ferrara) has become fabulously well off thanks to his personal tequila recipe, and Johnny (Kevin Dillon) is still going to cattle calls when he’s not hangin’ with the boys.

Naturally, what with the boys being, well, the boys, complications arise – a celebrity sex tape for Johnny (it’s as bad as you’d expect); two girls claiming E got them both pregnant; Ari’s adventures in anger management; the quietly menacing Texas billionaire co-financier, Larsen McCreadle (Billy Bob Thornton) and his son Travis (Haley Joel Osment) playing hardball for a beautifully unexpected reason; Turtle’s crush on Ronda Rousey (one of the best bits in the movie), and so much more. 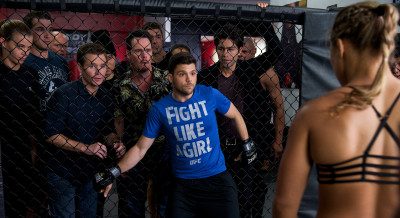 There are also the cameos. So many cameos. The most effective are probably Liam Neeson and Gary Busey. A few do flop, but they’re over in seconds and there’s another one around the corner. Most (like the Neeson and Busey ones) are integrated nicely into the flow of the movie – only Warren Buffet’s seemed particularly forced.

And I haven’t even mentioned Lloyd’s (Rex Lee) wedding plans and what he asks Ari! Or Mark Wahlberg and his entourage (the inspiration for the show) – there’s much more to that than the trailer suggests. So much good stuff! (And I really wouldn’t mind seeing Hyde, either…)

But don’t worry if you’re new to the Entourage world, there’s a clever recap that will bring you up to speed in no time.

Entourage was written and directed by the creator of the TV series, Doug Ellin, and he doesn’t really try to break outrageously new ground. What he does do is provide a script that’s sharper and more focused than much of the show’s later seasons. The editing is tight, the music is great and the testosterone flows like water.

The film is smarter than it needs to be, funnier than I expected it to be and doesn’t overstay its welcome – 104 minutes, so allowing for opening and closing credits, not too much more than an hour and a half.